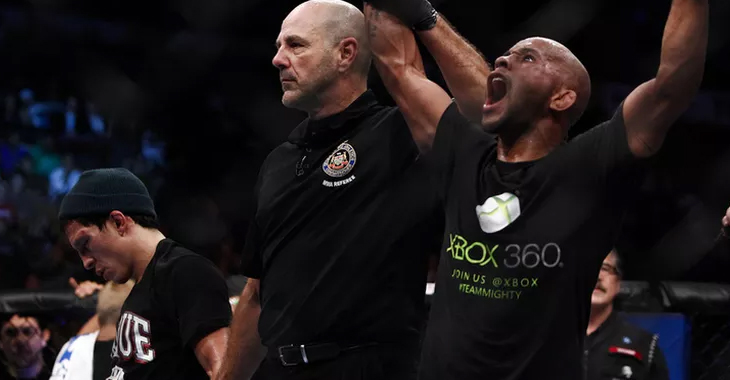 Do you remember when you were in school and someone did so well on a test that the teacher graded everyone on a curve? That curve is Demetrious Johnson. Were you ever jealous of a sibling that overshadowed the B you were proud of, because they got a A+? That A+ is Demetrious Johnson. An incredible fighter like Joseph Benavidez gets overlooked because Johnson is just that good, but he’s only ever lost to two men: Dominick Cruz and the one and only UFC flyweight champion. Out of 11 years and 25 fights, only losing to those two fighters is an amazing accomplishment. Still, as a fighter, you want the belt. You want to defeat the best in the world. Benavidez came very close at UFC 152, and it’s something he still gets lost in thought about.

“I was that close to finishing someone many consider the best ever [in the first fight]. It’s something that goes through my head all the time. Every little thing that I could have done different. I will randomly be driving and get upset. My wife will say ‘what’s the matter?’ and I will say ‘nothing.’ But sometimes I think about little things like that and if it could have gone another way. When I fought [Demetrious Johnson] the first time, you couldn’t predict the epic run that he would go on. But when you see him going through other opponents you think, ‘Wow, he tears these guys apart and makes them look normal.’ [His speed] is something you can’t adjust to. I tried to go with the fastest people I could leading up to the fights with him and you still can’t get as fast as him until you get there.”

On this day 5 years ago: Demetrious ‘Mighty Mouse’ Johnson beat Joseph Benavidez by SD at UFC 152 to be crowned the inaugural UFC FW champ! pic.twitter.com/bq4UpQKyEz

“The second fight he finished me so it wasn’t nearly as close as the first. That goes to show that he made adjustments. He knocked me out — saw a mistake within two minutes — a person who has never been finished in 30 fights previously, so he’s done what no one else has done. It’s like playing chess. We all have the same pieces, but he goes out there and executes them better than we do at the right time. I think he has great coaching — I have to give them credit. His preparation for every fight really sets him apart. Everyone has a formula to get beat. He goes out and pretty much runs that formula on every single person he fights.” — Joseph Benavidez speaking to ESPN.

That’s the thing about Demetrious Johnson, as great as Joseph Benavidez is, Johnson is that much better. We may see them have a third fight at some point when he returns from his leg injury, after all Benavidez is on a six-fight win streak and recently got a win over Henry Cejudo. However, tomorrow is Ray Borg’s time and Johnson’s chance to break Anderson Silva’s title defense record. We’ll be watching and we’re sure Joseph Benavidez will too.