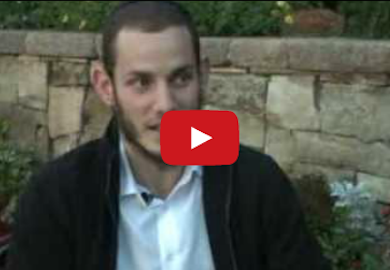 An Orthodox Jewish rabbi hadn’t thrown a punch in his life until he wanted to enter an amateur MMA fight.

Yossi Eilfort’s journey began six months ago when he joined forces with MMA fighter and judo specialist Thierry Sokudju of Cameroon and started training at Team Quest Gym in Encinitas.

“I never thought that a rabbi would be interested in fighting,” said Sokudju. “But I was stoked. He never quits.”

Eilfort trained nearly every day while balancing his duties at Chabad at La Costa. He also trained on Fridays during the fasting period, but had to forego a last round of preparation for Shabat.

The 22-year-old entered his first bout at Mansion Fights in a historic North Hollywood house and used the simple moniker “The Rabbi.” Before entering the octagon, he watched as a previous fighter was wheeled out on a gurney.

Twenty friends, family and congregation members were on hand to see him swiftly take down his opponent. Eilfort won in the second round by TKO.

“It was very uncomfortable hitting someone,” said Eilfort. “I actually held back, but I proved what I wanted.”

Eilfort recently decided to continue his fights with the next one slated for January 26 in Thousand Oaks, Calif.