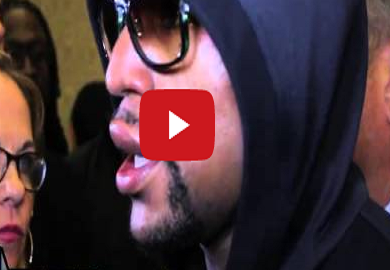 This past Saturday, Floyd Mayweather defeated Marcos Maidana for the second time. The fight extended Mayweather’s undefeated streak to 47-0.

Prior to the fight, there was some talk as to whether or not a superfight between Floyd Mayweather and Manny Pacquiao would materialize. After the bout Mayweather made it sound like he was interested in a fight against Pacquiao.

Several hours after the bout however, when Mayweather was asked about whether he wanted to fight Pacquiao, he ignored the question entirely.

Reporter: “Floyd, so are you now trying to fight Pacquiao?”

Mayweather: “We had a tremendous show tonight. I’m just keeping my fingers crossed that we did good numbers. I want to thank everybody that tuned in and bought on pay-per-view, and everybody who covered this fight. Without you guys, Floyd Mayweather wouldn’t be where he is today, so I’m very, very grateful.”

Watch the full interview below via FightHub:

It is worth noting that Pacquiao has a fight scheduled in November, meaning this bout likely wouldn’t occur until 2015.

Do you want to see this fight happen?