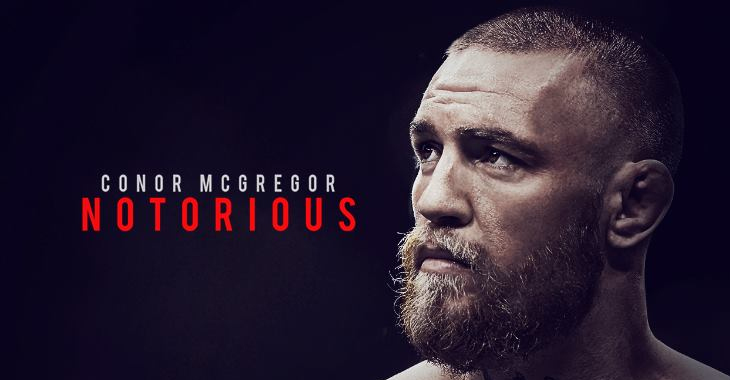 Conor McGregor is a veritable money-making juggernaut. When he’s not laying out champions in the UFC, he’s strutting on yachts with silky opened-button shirts flapping in the wind like he stole the wardrobe from Baz” Luhrmann‘s ‘Romeo + Juliet’. He works when he’s not working, even suffering a rare loss, he makes more money than most fighters did while winning. But long before earning the fire-spitting Lamborghinis and getting the infamous gorilla tattoo emblazoned on his chest, he was on welfare and living in his parent’s house. Now a feature film documenting his rise will be hitting theaters and the intense trailer just dropped.

The Irish takeover is nearly upon us… #Notorious. Coming soon. pic.twitter.com/5vj6ZDsJlU

“Conor McGregor is the biggest star in the history of Mixed Martial Arts and one of the biggest sports stars alive today. Filmed over the course of 4 years, Notorious is the exclusive, all-access account of Conor’s meteoric rise from claiming benefits and living in his parents’ spare room in Dublin to claiming multiple championship UFC belts and seven figure pay-packets in Las Vegas. Featuring unprecedented access, never before seen moments and explosive fight footage, this is the ultimate behind-the-scenes look at a sporting icon and his spectacular rise from the bottom to the very top.” — Official film synopsis from the ‘Notorious’ film website.

Not to be confused with Conor McGregor’s six-part documentary series of the same name, which was produced by McGregor and Motive Television for RTE, ‘Notorious’ looks like a huge step up in every way. The film will be released by Universal Pictures (in association with McGregor Sports & Entertainment) and will give an unprecedented look inside the McGregor’s life from the UFC until now. It’s hard to imagine that Conor McGregor has only been in the UFC since April 2013. In that short time, he’s become a two-division champion and landed one of the biggest fights in combat history. Relive his journey on November 8th in USA and Canadian theaters.