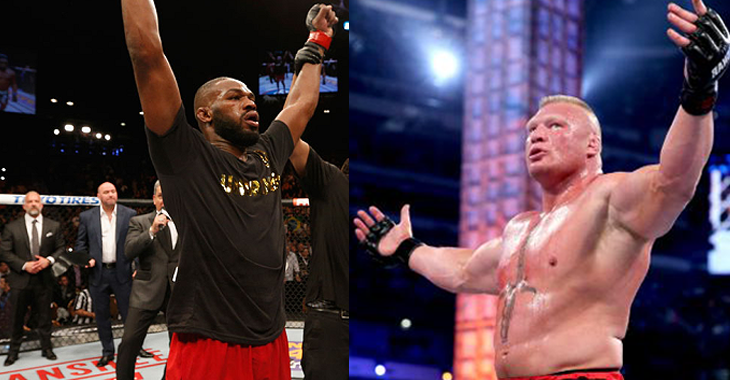 As we move on to the bigger cards of the year, fans and media are still haunted by the news of Jon Jones failing his tests and being flagged for his possible anti-doping violation. After the B sample came back positive, the line of attack now shifts to damage control and pursuing a legal battle to try and prove Jon Jones’ innocence. Hearing about the UFC’s plans of trying to put together a superfight with Stipe Miocic was one thing that was like a dagger in the heart, but not too long ago Bill Golberg revealed Brock Lesnar planned on coming back. His opponent? None other than Jon Jones.

“If [Brock Lesnar] wants to return, I think he does, I think he does. I think it may be in his plans. Although, yeah, a month ago [it was more likely]. [Jon Jones’ testing positive threw a wrench into it]. Yeah, a huge wrench into it, because if it ain’t Jon, there’s nobody big enough. Nobody, there’s nobody there for him to fight. Conor [McGregor], that’s it, and I only say Conor because he opened his mouth about all the WWE guys.” —  Bill Goldberg on The Fighter and The Kid Podcast.

“You know Goldberg the wrestler? He’s best friends with Brock [Lesnar] and I said, do you think Brock’s gonna’ come back? He said, ‘He was going to, before Jon [Jones] pissed hot.’ I said, you’re breaking my heart. Don’t that f-ck your Saturday up? That’ll f-ck your Saturday up. How crazy is that? He was going to. We were gonna’ see that monster again.” — Brendan Schaub on The Joe Rogan Experience following his interview with Bill Goldberg.

The buzz surrounding a possible fight between Brock Lesnar and Jon Jones started as just an off-hand remark in a Facebook Live session, however Jones took it to the next level by calling Lesnar out in his post-fight speech at UFC 214. What could have resulted in perhaps the biggest fight ever in UFC history looks now to be no more than what could have been. But never say never in this insane world of combat sports, because as soon as we say something can’t happen, it does.