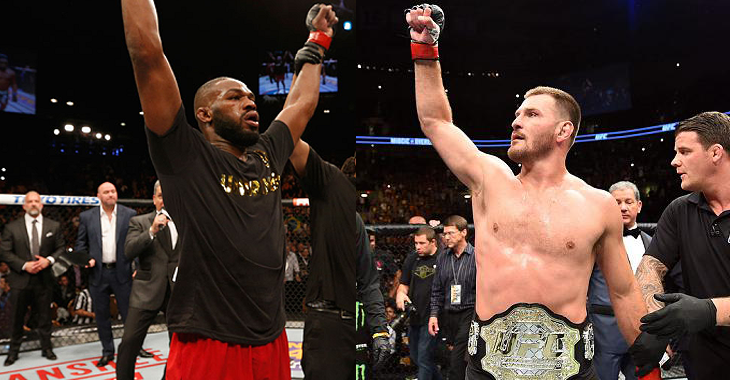 After two very closely contested rounds with “DC”, Jones was able to land a beautiful head kick in round three which left Cormier on wobbly legs and in all sorts of trouble. From there, “Bones” would get Cormier to the ground where he unleashed some brutal ground and pound which forced the referee to step in and call the contest.

It did not take long for “The Beast”, who is the WWE’s current Universal Champion, to respond to Jon Jones. Here is what Brock Lesnar had to say in a statement to the Associated Press.

During the UFC 214 post-fight press conference Jon Jones was asked to discuss why he opted to call out former heavyweight champ Brock Lesnar and not current UFC heavyweight title holder Stipe Miocic.

“I feel like if I was to take a fight at heavyweight, it would be against a person who I felt, and my coaches felt would be a perfect matchup for me. Right now Stipe (Miocic) is looking extremely impressive and I believe when you get an extremely talented big guy versus and extremely talented little guy, the cards are working in his favor. At the same time, I fear no man. But, I strike for a reason when I strike and I feel like right now Stipe is relatively unknown to the general public. So it wouldn’t be a real super-fight in my opinion. I feel like the MMA fans would be really excited about it. But the general public wouldn’t care about that fight. Most people really don’t know who he (Miocic) is, with all due respect to him. So if I am going to sacrifice being the smaller guy, I think that stylistically Brock Lesnar would be a fight that makes way more sense. And the payday would be tremendous! Plus what it would do for our sport would be tremendous. It would have a much greater effect (than a fight with Miocic). So for those reasons, a Brock Lesnar fight just makes way more sense for me.”

Who would you prefer to see Jon Jones fight, Stipe Miocic or Brock Lesnar? Sound off PENN Nation!