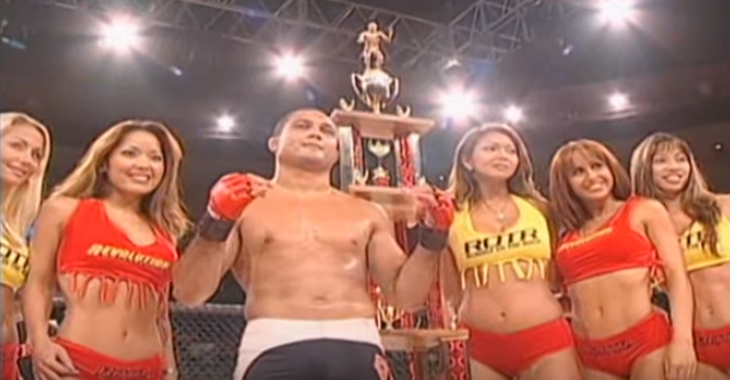 Years before Conor McGregor skirted his flame-shooting Lambo into the UFC to capture double gold and jump around for big fights, there was BJ Penn. When the first UFC lightweight champion Jens Pulver left the organization, the UFC put on a lightweight tournament to crown a new king of the world at 155-pounds. But after BJ Penn and Caol Uno fought to a draw in the finals, the UFC dissolved the entire division. This is what prompted Penn to search out new challenges, resulting in fighting future PRIDE lightweight champion Takanori Gomi in K-1 back in 2003.

BJ Penn proves that he is the #1 Lightweight fighter in the world,

when he submits Takanori Gomi with a rear naked choke pic.twitter.com/ujXCgSv2Y2

Takanori Gomi had just come off a 14-fight win streak, which was stopped by Joachim “Hellboy” Hansen who took Gomi’s Shooto world lightweight title. There was no belt on the line for the fight with BJ Penn, but it was unanimous at the time that the winner would be one of — if not the — best lightweight in the world. After a bloody three-round war, BJ Penn locked up a rear-naked choke. A year later, Penn would be UFC weltweight champion. Two years later, Gomi would be PRIDE lightweight champion.

After winning the UFC welterweight title, BJ Penn would continue in K-1. He beat names like Duane Ludwig and Renzo Gracie, even going all the way up to an heavy middleweight (191lbs) to fight a heavyweight Lyoto Machida. The rest is history, Hall-of-Fame entry history in fact. However, it’s important not to forget just how wild of a warrior BJ Penn was in his early career. He not only put the lightweight division on the map, but paved the way for one of most stacked divisions in UFC history.