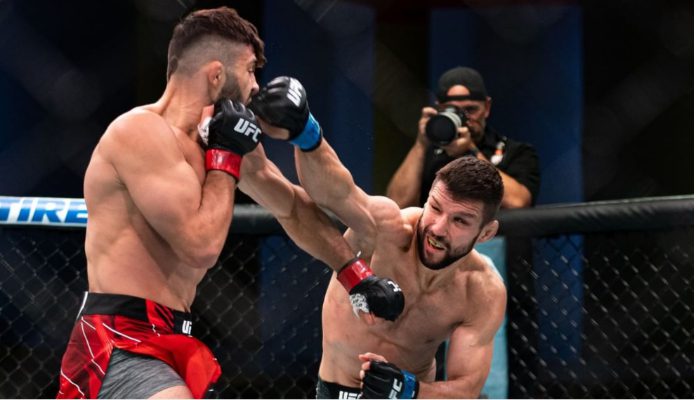 In the main event of UFC Vegas 57, an intriguing lightweight matchup as Mateusz Gamrot took on Arman Tsarukyan.

In the end, it was Gamrot who edged out a decision to pick up arguably the biggest win of his career. Now, after UFC Vegas 57 here is what I think should be next for both men.

Mateusz Gamrot suffered a close split decision loss in his UFC debut – which is the only loss of his career – and entered this fight as a sizeable underdog. The fight was competitive throughout and when it went to the scorecards, it was a toss-up who won, but all three judges gave Gamrot the final three rounds.

With the win, Gamrot will likely face a top-10 opponent next, and although he called out Justin Gaethje, that seems unlikely. Instead, a logical next fight is to face the winner of Rafale dos Anjos vs. Rafale Fiziev in another main event in the fall. The winner would then be in line to face a top-five opponent next.

Arman Tsarukyan thought he should’ve gotten his hand raised on Saturday night and he had an argument for that to be true.

Ultimately, he came up short but he didn’t lose any stock in the loss and still remains a legit contender in the division. The lightweight division is wide open and a fight that makes sense is for Tsarukyan to face Gregor Gillespie next time out. It would be a good test to see where both men are in the division and would be a very fun fight full of high-level scrambles.

What do you think should be next for Mateusz Gamrot and Arman Tsarukyan after UFC Vegas 57?