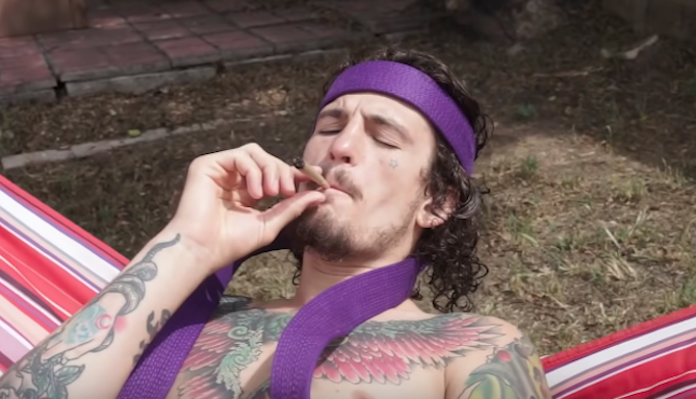 “Sugar” Sean O’Malley already has some of the slickest striking in the UFC bantamweight division, but his grappling skill is coming along nicely too. Earlier this month, the red hot bantamweight prospect was awarded his Brazilian jiu jitsu purple belt after years of grinding away on the mats.

O’Malley’s belt promotion was documented in a video posted to his official YouTube channel. The video concludes with the undefeated bantamweight, a known lover of the devil’s lettuce, celebrating in just the way you’d expect — with a joint in his hand and his purple belt wrapped around his head like Rambo.

Sean O’Malley entered the MMA limelight on Dana White’s Tuesday Night Contender Series, where he earned a UFC contract with a beautiful stoppage of Alfred Khashakyan. It was after this win that we got acquainted with his appetite for marijuana, as he smoked a joint with rapper turned commentator Snoop Dogg post-fight.

Since joining the UFC, O’Malley picked up impressive decision victories over respectable foes in Terrion Ware and Andre Soukhamthath.

After being sidelined by a six-month USADA suspension, Sean O’Malley is now scheduled to return to the Octagon opposite the dangerous and experienced Marlon “Chito” Vera on the stacked UFC 239 card. The event goes down on July 6, in the heat of International Fight Week, in Las Vegas, Nevada.

O’Malley will enter this fight with an unblemished 10-0 record and a reputation as one of the most promising young stars in the UFC bantamweight division.