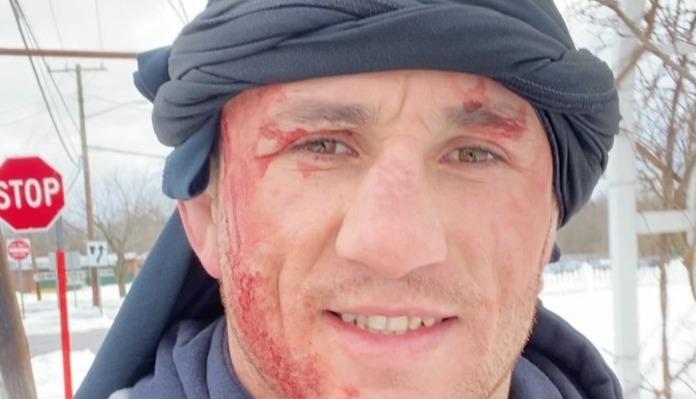 Merab Dvalishvili was out for a casual run and ended up in the hospital.

During his run, the 12th-ranked bantamweight contender in Dvalishvili came across a pond. The Georgian native then decided to jump into it thinking it wasn’t frozen, but it turns out it was as he went headfirst into a frozen pond and cut his head on the ice and branches.

Merab Dvalishvili captured the hilarious video on his Instagram and even showed himself on the walk back from the pond with a bloody face. He also had to go to the hospital and get his head stapled.

“I thought a great day to train and run in the park. Then I saw a pond which I thought was snow and water. BUT it turned out to be all ice and tree branches sticking out. As soon as I broke threw the ice I felt my skin peeling off. BUT nothing more painful then when they stapled my skin back together! Its all good now,” Merab Dvalishvili wrote.

The good news is the fact that Merab Dvalishvili is not seriously injured and had a good laugh about it.

Dvalishvili has not fought since he beat John Dodson at UFC 252 in August. He was supposed to face Cody Stamann in December but Stamann was forced out of the bout with a back injury. The fight was then rebooked for this Saturday but Merab Dvalishvili wanted more time to recover from COVID-19. He is currently 12-4 as a pro including being 5-2 in the UFC. He holds notable wins over Casey Kenney and Brad Katona. Both of his losses, meanwhile, are questionable as he was submitted by Ricky Simon at the end of round three. He also dropped a split decision to Frankie Saenz which was a fight many thought he won.

What do you make of this incident involving Merab Dvalishvili?