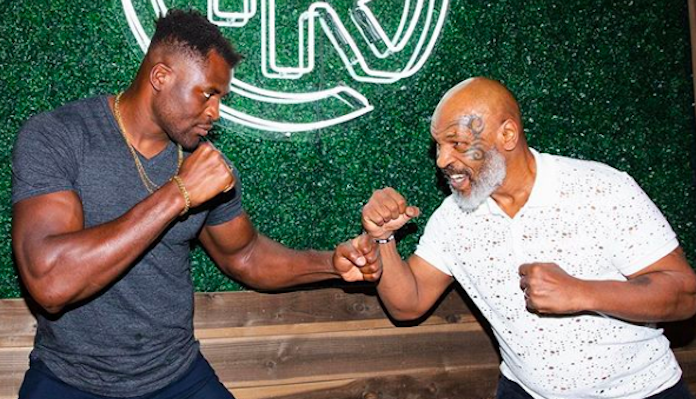 Just like Tyson was in his heyday, Ngannou has become known for his ferocious, one-punch knockout power, so fans were immediately excited to see these two stars working together. See it below:

Speaking on Twitter, Ngannou referred to his work with Tyson as “such a great learning experience.”

My time with the legend @MikeTyson was such great learning experience.

Ngannou has used his ridiculous, one-punch knockout power to win his last four fights, all via first-round knockout. The first of those wins came against Curtis Blaydes. The second and third came against former UFC heavyweight champions Cain Velasquez and Junior dos Santos, and the most recent came against Surinamese kickboxing specialist Jairzinho Rozenstruik. Ngannou dispatched of Rozenstruik on the main card of UFC 249 last weekend, ending the fight with a volley of punches just 20 seconds into the first frame.

Given that Ngannou already has a predilection for violent, one-punch KOs, it’s frightening to imagine what he might be capable of if she sharpens his boxing up a little a more. A training session with a legend like Mike Tyson is certainly a big step to that end.

Tyson, who is now 53 years old, is actually planning a comeback, having recently stated that he hopes to compete in a few exhibition bouts for charity. While the details of his comeback are still unclear, he has already been courted by several organizations, including upstart bare-knuckle promotion BKFC, who also recently signed 48-year-old British boxing star Shannon Briggs.

What do you think of Francis Ngannou getting a training session in with Mike Tyson?