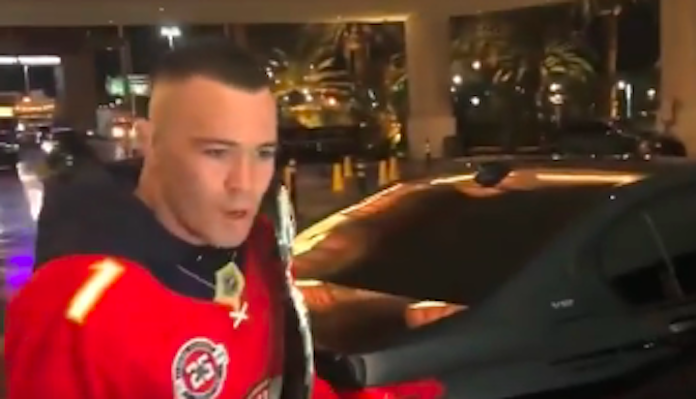 Colby Covington is in Las Vegas for UFC 235, and he is definitely making his presence known.

Shortly after crashing Kamaru Usman’s open workout and ambushing UFC President Dana White inside the casino, he tracked down White’s car, and threatened to destroy it.

Yes, you read that correctly.

Watch Colby Covington send this ominous threat to Dana White in the video below:

“Uncle Fester, what’s up buddy? I found your car,” he began, using his favorite nickname for Dana White. “You want Tyron Woodley to go shine your rims some more buddy? The real welterweight champ is out here, Colby ‘Chaos’ Covington. You remember? We went to the White House together. I know you haven’t forgotten me. I’m the real welterweight champ. The People’s Champ. Everybody wants to see me fight! Why are you making these boring ass fights? I might just have to fuck your car up. When you come outside the Palms, it might night look like that when you come out here, Uncle Fester.”

Needless to say, Colby Covington is not happy with Dana White. The former interim champ’s main gripe with the UFC boss stems from the UFC’s failure to give him the fight with undisputed welterweight champion Tyron Woodley that he was promised. That being said, he is expected to fight the winner of Woodley and Usman’s UFC 235 fight.

How do you think Dana White will react to this stunt from Colby Covington?