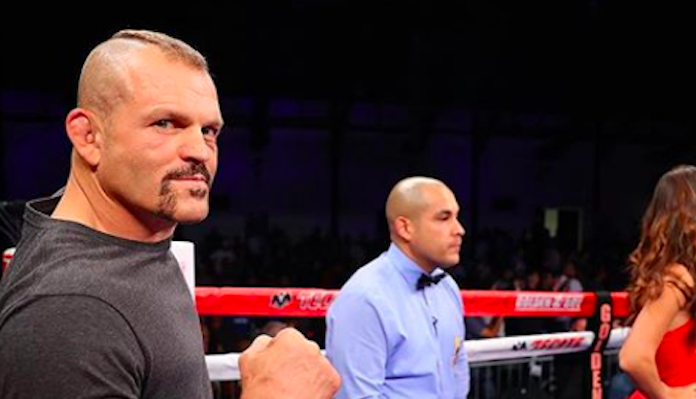 Chuck Liddell returned to the cage for the first time in over eight years last weekend to participate in a trilogy fight with bitter rival Tito Ortiz.

The former UFC light heavyweight champions, Liddell and Ortiz, had previously competed at UFC 47 and UFC 66, with “The Iceman” emerging victorious on both occasions.

After all, Chuck had not competed since UFC 115 in June of 2010, where he suffered what at the time was his third stoppage loss in a row.

Meanwhile, Tito Ortiz entered Saturday’s controversial contest having most recently competed at Bellator 170 in January of 2017, where he defeated Chael Sonnen via submission.

Unfortunately for Chuck Liddell, the mixed martial arts legends return to action did not go as planned.

“The Iceman” was dropped by Tito Ortiz with a right hand late in round one and eventually put Chuck away with ground and pound.

Despite the setback, and the backlash from some fans about the fight itself, Chuck Liddell is glad to have participated last weekend.

“To all my close friends, family and fans out there. I want to thank you for your tremendous love and support. I don’t know where I would be without you guys.” said Chuck Liddell. “Now I want to give you an important message. These past few months for me were a lot more than a fight against Tito (Ortiz). Its really been about my own personal journey and challenge. Martial Arts has been my life. Thirty-six years. I felt lost without it. It has always kept me centered so that I could find my focus. I wish the outcome of the fight was different. I never wanted to disappoint anyone, or let anyone down. But this fight was more about pushing my limitations and getting my back to a place to find my purpose. And for that, I have no regrets. For anyone else out there who is struggling with self doubt or physical, mental or an emotional challenge… I encourage you to face your challenges. Chase your dreams and risk everything to reach your goals.”

Do you think we will ever see mixed martial arts legend Chuck Liddell take to the cage again? Sound off in the comments section PENN Nation!