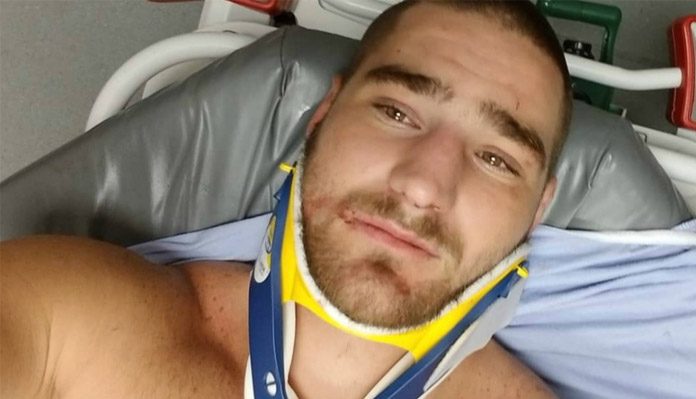 UFC welterweight Sean Strickland was involved in a serious motorcycle accident over the weekend and won’t be fighting anytime soon.

The 27-year-old posted a short video on his Instagram explaining the situation.

“I was riding back from Kings (MMA), and I got in an accident,” he said. “It wasn’t my fault, but I’ve been blacked out for a good minute. I just came to after surgery. It’s going to be a long road back, but I love fighting, so I’ll get back on the ball and make it happen. Thanks for the support.”

Sean Strickland (20-3) was riding his motorcycle after training session at King’s MMA and was struck by a vehicle. No further details on who hit Strickland or if he plans to press charges.

As a result of the accident, Strickland will undergo knee surgery to repair some of the damage and expects to be out a number of months. He was adamant however that this accident will not derail his fight career. One of the more active fighters on the roster, Strickland has fought at least two times a year dating back to his second pro-fight in March of 2009. Strickland also posted a thank you message to those who reached out in support.

“You guys are amazing thank you for all the messages,” he said. “The Morphine has been keeping me asleep lol! Once again thank you all for everything!!!”

The Team Quest product is coming off a second round TKO win over Nordine Taleb at UFC Fight Night 138 in October. “Tarzan” is 7-3 in the octagon, earning notable wins over Alex Garcia, Tom Bresse and Court McGee. After going 18-1 in his career, Strickland has gone 2-2 in his last four fights, suffering losses to Kamaru Usman and Elizeu Zaleski.

Stay tuned for more updates on this Sean Strickland situation as they emerge.