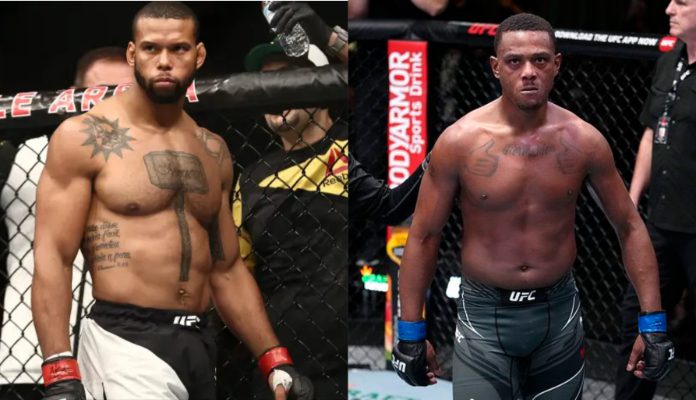 Santos (22-10 MMA), a former light heavyweight title challenger, will enter tonight’s headliner looking to rebound after suffering a decision loss to Magomed Ankalaev back in March. ‘Marreta’ has gone just 1-4 over his past five Octagon appearances overall.

Meanwhile, Jamahal Hill (10-1 MMA) enters the bout sporting a two-fight winning streak, with both victories coming by way of first round knockout. In his most recent appearance in February, ‘Sweet Dreams’ scored a highlight reel knockout over Johnny Walker.

Tonight’s UFC Vegas 59 event is co-headlined by a welterweight bout between Vicente Luque and Geoff Neal.

Luque (21-8-1 MMA) enters the contest looking to rebound after having his four-fight win streak snapped by Belal Muhammad back in April. Prior to that setback, ‘The Silent Assassin’ was coming off four straight stoppage wins, which included finishes of Michael Chiesa and Tyron Woodley.

Meanwhile, Geoff Neal (14-4 MMA) was last seen in action at December’s UFC 269 event, where he earned a split decision win over Santiago Ponzinibbio. That victory was preceded by back-to-back decision losses to Neil Magny and Stephen Thompson respectively.

Also featured on tonight’s UFC Vegas 59 lineup is the return of lightweight standout Terrance McKinney who is set to face Erick Gonzalez.

McKinney (12-4 MMA) last competed back in March, where he suffered a first round TKO loss to Drew Dober. Prior to that setback, ‘T-Wrecks‘ had put together a five-fight winning streak which included two stoppage wins under the UFC banner.

As for Erick Gonzalez (14-6 MMA), ‘The Ghost Pepper’ will enter UFC Vegas 59 looking to bounce back from a knockout loss to Jim Miller in his promotional debut. Prior to that defeat, the California native was coming off back-to-back wins on the regional scene.

Vicente Luque vs. Geoff Neal – Neal def. Luque via KO (punches) in Round 3

Zac Pauga vs. Mohammed Usman – Usman def. Pauga via KO (punch) in Round 2

Brogan Walker-Sanchez  vs. Juliana Miller – Miller def. Walker via TKO (strikes) at 3:57 of Round 3

Augusto Sakai vs. Sergey Spivak – Spivak def. Sakai via TKO (punches) at 3:42 of Round 2

Finish No. 6️⃣ in a row to start #UFCVegas59

Serghei Spivac gets it done in round 2 💪 pic.twitter.com/WgIwyFEELy

Terrance McKinney vs. Erick Gonzalez – McKinney def. Gonzalez via submission (rear-naked choke) at 2:17 of Round 1

Miranda Granger vs. Cory McKenna – McKenna def. Granger via submission (Von Flue Choke) at 1:03 of Round 2

McKenna pulled off a Von Flue choke for the W 😲 #UFCVegas59 pic.twitter.com/QtpUq4iLB9

Mayra Bueno Silva vs. Stephanie Egger – Silva def. Egger via submission (referee polling) at 1:17 of Round 1

An interesting finish to the first fight of the night – we are off to video review! #UFCVegas59 pic.twitter.com/f1TZqjxLqI

Who are you picking to win tonight’s UFC Vegas 59 main event between Thiago Santos and Jamahal Hill? Share your predictions in the comment section PENN Nation!