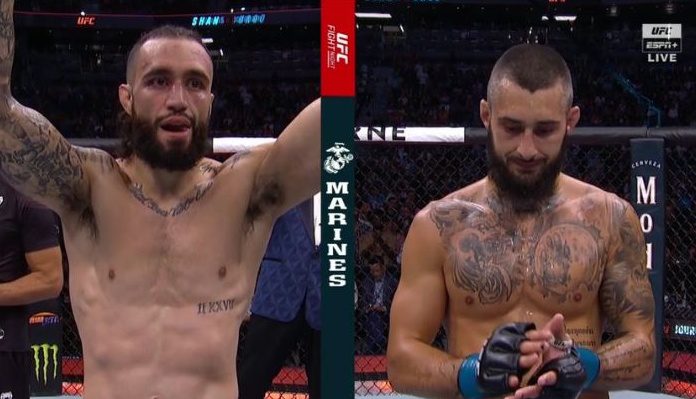 Burgos (14-3 MMA) last competed in November of 2021 at UFC 268, where he scored a unanimous decision victory over Billy Quarantillo. The victory snapped a two-fight losing skid for ‘Hurricane’.

Round one of this men’s featherweight contest begins and Shane Burgos comes forward quickly. Charles Jourdain keeps him at bay with a high kick. He lands another. A low kick from Burgos. Jourdain returns it. A 1-2 from ‘Air’. A big low kick from Burgos. He clinches up to put Jourdain on the cage. A trip takedown from Burgos and he lands on top in half guard. Jourdain up fast, but Burgos kicks off the fence with one hook in and takes his back as Jourdain scrambles. Neck crank from Burgos. Jourdain fights it off. A body triangle now from Shane Burgos. Charles Jourdain stands and shrugs him off. A high kick and a left hand from Jourdain. He follows that up with a low kick and another left. He clinches up and Burgos lands a knee. Jourdain trips him and scores with a 1-2. Big knees now from ‘Air’. Burgos circles away and lands a hard jab. Burgos pressuring now and Jourdain tries a headkick but it doesn’t land clean. A clinch knee from Burgos. A high kick and left hand from Jourdain. The horn sounds to end round one.

Round two of this featherweight contest begins and Charles Jourdain lands a body kick. Shane Burgos with a low kick. The fighters trade lefts. And again. Jourdain lands a right. Jourdain with an elbow to 1-2. Burgos responds. Jourdain goes to the body. Burgos ducks under a punch and lands a takedown. He moves to take the back. Burgos with a body triangle now. Jourdain stands. ‘Hurricane’ looks for a rear-naked choke. Jourdain drops down to avoid and then gets back up to his feet. Burgos goes for the knee again and Jourdain drops back down. Burgos around the face with a neck crank. He doesn’t get the finish and the horn sounds to end round two.

Who would you like to see Jourdain fight next following his decision victory over Burgos this afternoon in New York? Share your thoughts in the comment section PENN Nation!