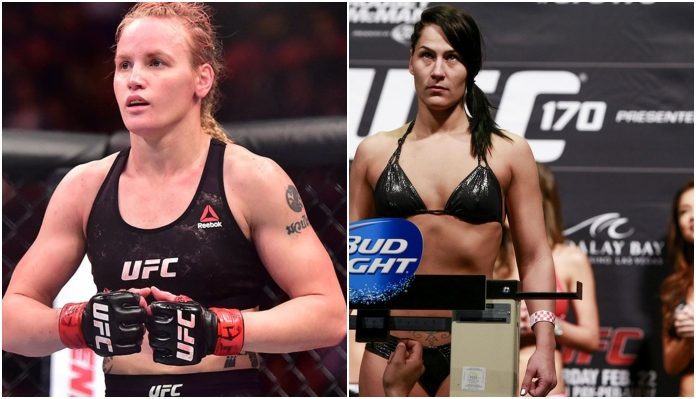 Valentina Shevchenko put her flyweight title on line for the very first time against Jessica Eye this evening in Chicago at UFC 238.

The women’s flyweight fight served as the co-main event of the evening.

‘The Bullet’ had gone 5-2 under the UFC banner headed into tonight’s UFC 238 co-headliner. Shevchenko’s only losses in that time have come via split-decision to reigning women’s ‘champ champ’ Amanda Nunes.

Tonight’s UFC 238 co-main event was a lopsided beat down which saw Valentina Shevchenko nearly submit Jessica Eye at the end of Round one.

After only landing one significant strike in the opening round, things just got worse for Eye in round two.

Valentina was able to land a brutal head kick which sent Eye crashing to the canvas and signified the end of tonight’s UFC 238 co-main event.

Check out how the pros reacted to Valentina Shevchenko destroying Jessica Eye at UFC 238 below:

Damn I hope Jessica is okay. That was serious

That was naaaaaaasty!! @BulletValentina we always knew you were savage but damn!!

And just like that, no one wants the next title shot against bullet ! #UFC238

What was your reaction to tonight’s UFC 238 co-main event bout between Valentina Shevchenko and Jessica Eye? Sound off in the comments section Penn Nation!