Sean O’Malley is a near impossible puzzle to solve according to his coach Tim Welch.

‘Suga Sean’ will head into the biggest fight of his career at UFC 280 against Petr Yan. #12-ranked O’Malley sits 10 places behind the Russian at bantamweight and has never beaten anyone inside the top-10.

‘No Mercy’ is a former champion and widely-credited with having some of the slickest hands in the UFC. O’Malley is an elite striker in his own right. The 27-year-old has racked up six performance bonuses during his tenure inside the Octagon as well as a string of viral knockouts.

Coach Tim Welch has seen the LFA veteran make a fool of many shorter, high-level opponents in the gym, and he believes that Yan could face a similar fate.

“We train with super elite people,” said Welch in an interview with Submission Radio. “We train with very good strikers too. And all the people that he spars that are that size, he makes them look stupid. And Petr’s probably a little bit on another level than a lot of them, and he’s gonna be really tough. But a big cage and the size difference and the speed difference and the accuracy of Sean and how good he is at punching at range, I think it’s gonna be the closer we get, I feel like Sean (O’Malley) could make Petr look stupid.”

Tim gives us a look into O’Malley’s camp for Yan, talks Sterling/TJ, why he believes we’ll see a rematch with Vera, creating a new lane for fighters, Sean at 145, taking on an internet troll + more!

O’Malley stands at 5’11 while Yan is four inches shorter. Welch believes the range and size factor of his student is going to be significant and added, 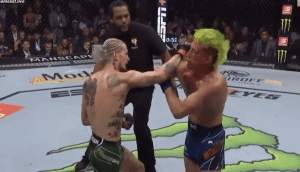 Yan was riding a 10-fight winning streak before dropping a DQ loss to Aljamain Sterling in 2021. He then beat a very game Cory Sandhagen before losing a unanimous decision to ‘Funk Master’ in their rematch in April. Despite those losses, the Russian remains one of the best 135-ers in the world, and if O’Malley overcomes him he will likely be the next in line to challenge for the title.

It’s a monster of a match-up, and the American believes that a win here will even take him to Conor McGregor levels of superstardom.

This article appeared first on BJPENN.COM
Previous articleAljamain Sterling trashes USADA for failing to catch T.J. Dillashaw: “I thought they tested for everything”
Next articleDaniel Cormier explains why he’s against the UFC booking an immediate trilogy fight between Amanda Nunes and Julianna Pena
© Newspaper WordPress Theme by TagDiv