The shuttering quake from comatose welterweight star Ben Askren crashing to the canvas in record-breaking time at UFC 239 could be felt from Nevada to Singapore, where former UFC flyweight champion Demetrious Johnson was shipped off to in a historic trade less than a year ago. Not even the Richter scale is capable of measuring the size of those tremors, which opened up cracks in the reasoning Johnson was ever traded in the first place.

That isn’t to suggest Ben Askren in the UFC hasn’t been entertaining. It has been a rollercoaster ride and cotton candy rolled into one. He talks the talk and walks the walk against the toughest guys in the UFC; guys that boast the kind of knockout power to alter careers with a single strike.

What more could you ask?

No, these cracks have more to do with the flyweight division still clinging to life support. Trading Johnson to ONE Championship seemingly sounded the death knell for the 125-pound weight class in the UFC, although UFC President Dana White never specifically mentioned as such. Yet, the writing was on the wall with flyweight champ Henry Cejudo chasing bantamweight super fights and pink slips being handed out left and right to some of the best collection of flyweight talent in the world.

That was until White confirmed the division would be sticking around during a post-fight press conference in June.

“Have I said that it’s going away? Did I say it’s leaving?” White asked. “I haven’t even talked about that division in months. …I just did. It is confirmed [the division is staying].”

If the flyweight division is indeed staying, one has to wonder why the UFC ever traded Johnson in the first place, especially with a rubber match with Cejudo still on the itinerary. Johnson, who set the record for UFC title defenses and went unbeaten for six years, was sent packing without so much as an opportunity for a rematch. Not to mention the plethora of other talent unloaded into the free agent market in the aftermath of the trade. 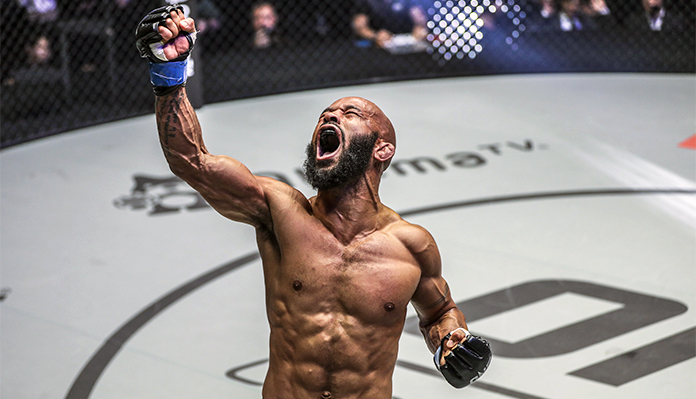 Those are both fair questions with varying answers depending on the source. There’s also the possibility the shake-up was a pending move whether the promotion landed Askren or not. White has vocalized in the past how the fans didn’t care about the flyweight division, and those comments echo loudly in a near empty room of 125 pound contenders.

The irony is Cejudo’s expedited rise to superstardom coming in the wake of the division’s critical condition. It’s the one outcome that couldn’t be calculated when pen was put to paper in the Askren for Johnson swap. It’s the outcome that chips away at a seed of doubt the right decision was made.

There certainly isn’t any doubting ONE FC’s choice to acquire Johnson, who is arguably the greatest fighter in MMA history. The fledgling promotion has impressed in its ability to build and promote the lighter weight classes, and they’ve expanded on those efforts by trading for Johnson and continuing to sift through a surplus of world-class talent on the free agent market. Not to mention the bevy of homegrown talent hankering for a crack at household names.

The pathway is perfectly laid out in the direction ONE FC is headed after the trade, while the UFC’s is a harum-scarum road of mystery.

White obviously has a plan if the UFC is seriously adamant about keeping the flyweight division around. Perhaps he fills the roster by simply re-signing some of the released talent to new contracts, or there’s always the option of starting from scratch and focusing on lesser known talent. The mecca promotion has plenty of ways to highlight the latter through The Ultimate Fighter and Dana White’s Contender Series.

One thing is certain: The UFC isn’t apologizing for acquiring Ben Askren, who has been a proven pay-per-view needle-mover since joining the promotion. An argument could easily be made that his fight with Jorge Masvidal, which wasn’t even the co-main event, was the most anticipated bout on a UFC 239 card featuring light heavyweight champion Jon Jones and women’s two-division champ Amanda Nunes.

The kaleidoscopic ride through “Funkytown” was always going to be more than a two-stop destination for the UFC and Askren. And thousands of miles on the other side of the globe, across ocean and continent, the same holds true for ONE FC and Demetrious Johnson—a powerful pairing of burgeoning promotion and superstar talent that could alter the flyweight landscape forever.