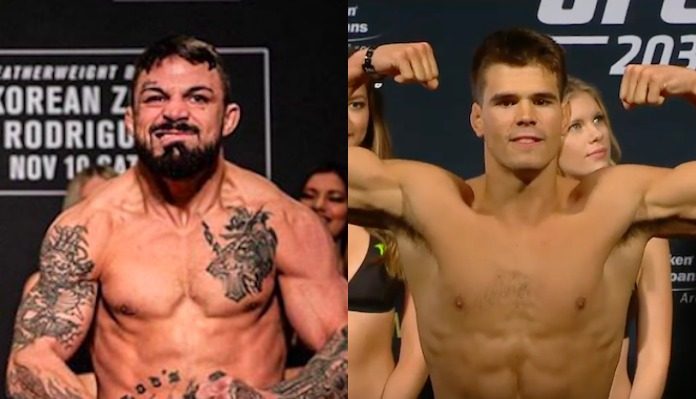 Mike Perry fought mere weeks ago, losing by first-round submission to Donald “Cowboy” Cerrone on the Denver card, but he’s already itching to get back in there. And he’s even got an opponent in mind.

”[Cerrone] was in the gym with Gracie Barra drilling in the gi, grappling all the time,” Mike Perry told ESPN recently. “He was with Mickey Gall too, let’s fight that motherf**ker. I’ll fight Mickey Gall. F**k Mickey Gall. I’m gonna get into the gym, go grapple, and I’m gonna crush everybody from here on out.”

Perry’s callout of Gall was initially met with silence, but eventually, the welterweight grappling specialist fired back. He says he’s willing to put his desired fight with Diego Sanchez on the back burner for a fight with Mike Perry, and that he’d like the fight to occur on the UFC’s first card on ESPN in January.

”F**k Mike Perry,” Gall said in his response on Instagram (transcript via MMA Mania). “I heard him call me out on Ariel’s show. Says he wants to fight. Aight, motherf**ker, careful what you wish for. Let’s fight. Let’s fight January 19th in Brooklyn on that first ESPN UFC card.”

Mike Perry, unsurprisingly, was right on board with this comment from Mickey Gall.

Always good stuff happening in the fight world. A lot to catch up on over the weekend. @Alistairovereem wins @francis_ngannou wins and @ChuckLiddell did not win but is a legend ! I’ll be back grappling this week. I’ll know more about my arm like when I can beat up @mickeygall 💣

“I’ll be back grappling this week,” he said in a Tweet. “I’ll know more about my arm like when I can beat up [Mickey Gall].”

You know I’m always available. I like how @ChaelSonnen said “I’m free tonight” but I’m never free, I’m very expensive and I would love for the @ufc to pay me to beat your ass in New York @mickeygall

“You know I’m always available,” Perry added in a second Tweet. “I like how [Chael Sonnen] said ‘I’m free tonight’ but I’m never free, I’m very expensive and I would love for the [UFC] to pay me to beat your ass in New York [Mickey Gall].”

Do you want to see Mickey Gall and Mike Perry fight? Who do you think would win?