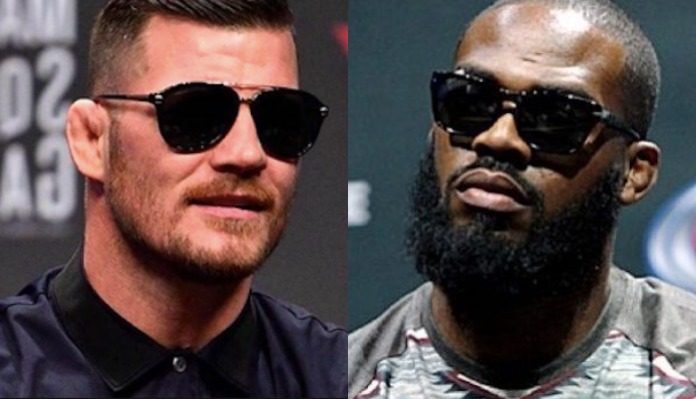 Jones was in Las Vegas this past week for his own induction into the UFC Hall of Fame for his epic war against Alexander Gustafsson in 2013, but the week ended on a bad note for Jones as he was reportedly arrested on several charges Friday morning. Speaking on his podcast, Bisping shared his thoughts on Jones just days after he was arrested again.

“I’m not here to sh** on Jon Jones. I have tremendous respect for his accomplishments inside the octagon. And most of the time when I’ve spoken to Jon, my interactions have been fantastic. I saw him just recently in Vegas, and we stopped, and we shared a picture, and we had a laugh, and we spoke for a few minutes. And I wish him all the best. He’s a good person, but he’s just making some bad choices,” Bisping said (h/t SportsKeeda).

“I don’t know the story. Now, of course, the charge is domestic battery, right? So, that alludes to, unfortunately, you know, maybe assault on a woman. I will say this; we don’t know the details. But a man, certainly a man like Jon Jones – a large man, and who’s also one of the greatest of all time, if not the GOAT, of mixed martial arts, has absolutely no place hitting a woman,” continued Bisping. “And if that is what happened, then it’s deplorable, and there’s no excuse. I’ve never done it. I would never dream of putting my hands on another woman. And Jon Jones shouldn’t be doing the same.”

Was your reaction to Jon Jones’ latest arrest similar to the reaction from Michael Bisping?