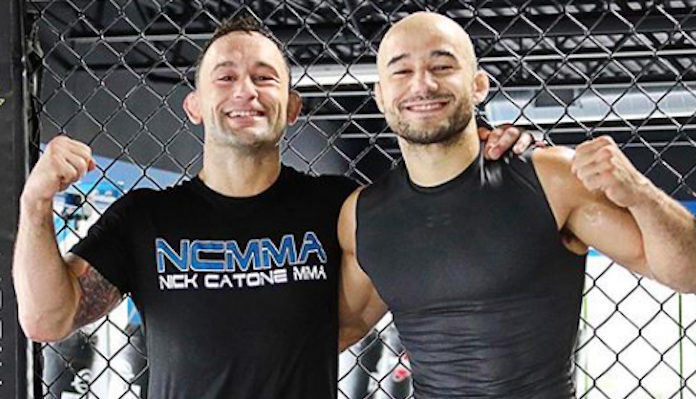 All fighters want to maximize their chances of winning and will strategically spar with fighters of a specific skillset to ensure things go their way in the cage. Marlon Moraes has turned to Frankie Edgar to increase his odds of beating Henry Cejudo at UFC 238.

Commonly known for his knock out power and leg kicks, Moraes has been utilizing featherweight fighter, Frankie Edgar to improve his wrestling ability as impeccable wrestling will be essential against Henry Cejudo. Cejudo is an Olympic gold medalist in wrestling, and Moraes is expecting that will be the focus of the fight.

During an interview with Portal do Vale Tudo, Marlon Moraes said:

“I’m expecting a heavy wrestling-oriented gameplan from Cejudo, but I’m ready. I’m more ready than ever. I’m coming into this fight with a strong desire to become a champion. I trained very hard and my time has come. It’s my time to become the champion. Frankie Edgar was essential in my training camp for this fight. We have been training together a lot, his MMA wrestling is very strong. I intend to make use of all of its qualities, implement them into my arsenal and walk out of there a champion.”

Marlon Moraes and Frankie Edgar train together often under the tutelage of Mark Henry. During his fights, commenters have noticed Edgar’s fighting style echoed in Moraes’ performances. This includes Moraes’ boxing style, constant level changes and body-to-head striking combinations. Similarly, Moraes is confident in Edgar’s ability and believes he has a good chance in his upcoming fight vs Max Holloway at UFC 240.

“He is scheduled to fight Max (Holloway) at UFC 240. It’s going to be a tough fight, but Frankie is ready to fight anyone, and we are ready to surprise people. Frankie will impose his gameplan and we will both get the belts. I’ll get mine on the 8th and Frankie will snatch his on the 27th,” he said.

Since losing to a split decision against Raphael Assuncao in his UFC debut, Moraes’ has leapt up the UFC rankings, beating formidable contenders such as Aljamain Sterling and John Dodson. He avenged his loss in a victorious rematch against Assuncao earlier this year.

UFC 238 goes down in Chicago at 10:00 pm ET this Saturday. How do you think Marlon Moraes will fair against Henry Cejudo?