Leon Edwards explains how his body shut down at UFC 278

Leon Edwards made history at UFC 278 with a strong candidate for knockout of the year.

His incredible headkick finish against Kamaru Usman late in the fifth round extended his winning streak to 10 fights and sealed his place in UFC history as only the second-ever British champion.

The moment it hit @Leon_EdwardsMMA what he just did 📸#UFC278 pic.twitter.com/Xa4lXZvhx5

The stoppage was made all the more remarkable by what had happened in the preceding rounds. Having looked good in the opening stanza, the challenger was on the back foot thereafter (until the stoppage) as he suffered under the weight of the now former champion’s wrestling prowess.

Standing 1,288 m above sea level – Salt Lake City is a notoriously tough venue for elite athletes. This was evident last weekend. Speaking to Ariel Helwani on the MMA hour, the newly-crowned welterweight champion explained how the elevation began to affect him and his fellow fighters.

“I was watching it backstage, and I was thinking in the back of my head as I was warming up, ‘S**t, why is everyone getting tired?’ When we went out there, after the first round, I can’t explain it, my body just shut down. It was just a weird feeling. It wasn’t cardio, it was like my body just wasn’t reacting. In my head I could think what I wanted to do, but my body just wasn’t doing it.”

Leon Edwards has looked dominant for the majority of his previous 10 bouts with 8 of them going the distance. Two of those were 5 round affairs. Needless to say, the Jamaican-born fighter is not one to be accused of lacking in cardio.

“My 10 fights I had to get to this point to fight for the championship, I never looked like that in a fight, ever. Even when I was fighting, I was looking ahead like, ‘Man, what the hell is going on? Just keep pushing. I know he’s crafty and the body is feeling it, but just keep working and stay focused. It’s never over until it’s over.’ I stayed in there and got the clean head kick KO,” he explained.

Both Leon Edwards and Usman have evolved since their first meeting in 2015. The Brit has vastly improved his ground game and became the first fighter ever to take ‘The Nigerian Nightmare’ down to the canvas. The Birmingham-native even threatened with a submission and ended the round at his opponent’s back.

Leon Edwards’s first defence of the title could well be a trilogy clash with Usman. However, a bout agaimst old enemy Jorge Masvidal in London has also been mooted, and with Nate Diaz set to take on #3-ranked Khamzat Chimaev at UFC 279 – the winner of that fight could well be in the running for a crack at the division’s new king.

Who do you think Leon Edwards should defend the strap against? 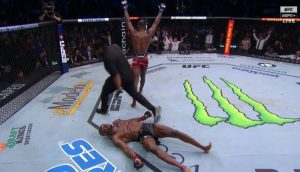 This article appeared first on BJPENN.COM
- Advertisement -
Previous articleConor McGregor reacts to news that Kamaru Usman’s daughter was carried off the arena floor bawling her eyes out at UFC 278: “I feel this deep. I do not suggest bringing family whatsoever”
Next articleTJ Dillashaw “is going to go ahead and beat Aljamain Sterling,” says former opponent: “He has a better skill set”