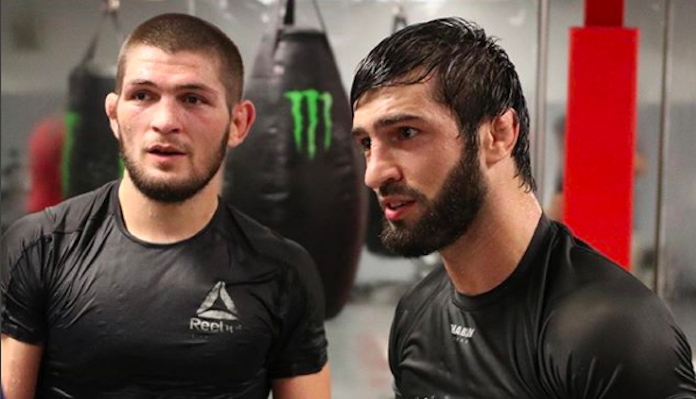 Reigning UFC lightweight champion Khabib Nurmagomedov vowed that he would not return to the Octagon until his teammates Zubaira Tukhugov and Abubakar Nurmagomedov were cleared to fight again. Given that they were initially suspended one year for their roles in the infamous UFC 229 brawl, and therefore ineligible to fight until October, that presented a bit of a problem as a the UFC has worked to book a title fight between Nurmagomedov and Dustin Poirier at UFC 242 on September 7.

Luckily, a solution has been reached.

According to a report from MMA Junkie, the Nevada State Athletic Commission (NSAC) has approved 35-day reductions in the suspensions of both Khabib Nurmagomedov training partners. This clears them to fight as soon as September 2, and means that Nurmagomedov can fight on September 7 without breaking his promise.

Abubakar Nurmagomedov and Zubaira Tukhugov have both already paid $25,000 fines. As part of their suspensions reductions, both men will have to have to complete 10 hours of community service with the specific intention of benefitting local youth.

“Provided it is significant and productive for the youth, upon my approval and recommendation to the commission, the commission would then reduce their suspension 35 days, thus allowing them to fight on or after after Sept. 2,” NSAC director Bob Bennett told MMA Junkie.

From the sounds of it, the fighters are all satisfied with this adjusted deal.

“It’s been a rough process that cost us a lot of money and time,” Ali Abdelaziz, the manager of Zubaira Tukhugov, Abubakar Nurmagomedov and Khabib Nurmagomedov, told MMA Junkie. “I’m glad it’s over. Now Abubakar and Zubaira can get back to do what they love to do and pursue their dreams.

“I want to thank Mr. Hunter Campbell for his help throughout the process. Without him this couldn’t happen.”

While nothing its official just yet, it seems likely that we’ll see Zubaira Tukhugov and Abubakar Nurmagomedov join Khabib Nurmagomedov on the UFC 242 bill.