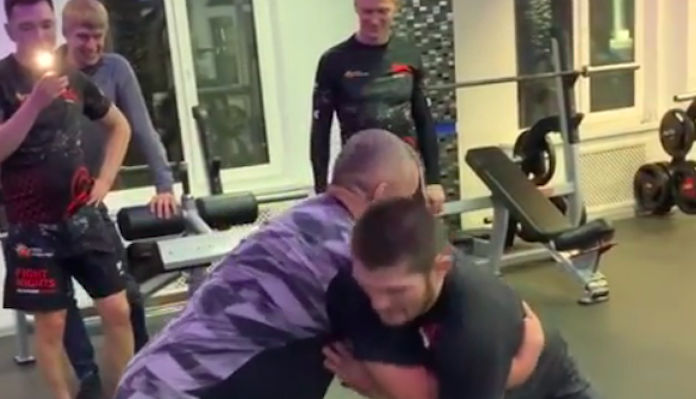 Current UFC champion Khabib Nurmagomedov has overcome all the adversity he’s faced in the lightweight division, however, there is one challenger he’s yet to defeat: his father.

Nurmagomedov recently grappled with his “greatest challenge”, his father Abdulmanap Nurmagomedov. The clip was posted on Instagram by his coach, American Kickboxing Academy’s (AKA) Javier Mendez, who paid his respects to the Nurmagomedov duo.

Originally from Dagestan, Russia, the Nurmagomedov family have an unparalleled dedication to the sport. Since childhood, Khabib’s father has instilled a strong work ethic in Khabib that he applies to life and not just MMA. A devout Muslim, Khabib attributes his success to his religion and practices a no drinking, no drugs policy. He has a simplistic yet disciplined philosophy he applies to his daily life.

A strong athlete himself, Khabib’s father Abdulmanap Nurmagomedov had wrestled from an early before undertaking judo and sambo in the military. He raised Khabib Nurmagomedov to wrestle in childhood, a common activity for children in Dagestan. Khabib and his peers would train in the mountains or use a local gym that Khabib’s father converted for them all to use. Khabib Nurmagomedov would train with running, shadow boxing, callisthenics and other techniques that are simple but effective.

His fighting style has stood the test of time as Khabib utilizes his grappling ability to retain his undefeated record (27-0). Most recently, Nurmagomedov submitted Conor McGregor in 2018 with a neck crank in the fourth round.  The victory was somewhat overshadowed by Khabib jumping over the Octagon fence after the fight and attacking McGregor’s team, causing a brawl to ensue. He received a suspension for the incident.

Khabib Nurmagomedov is expected to return to the Octagon in a bout against interim champ Dustin Poirier. Although the fight still needs to be finalized, it is anticipated for the UFC 242 pay-per-view (PPV) in Abu Dhabi, September this year.