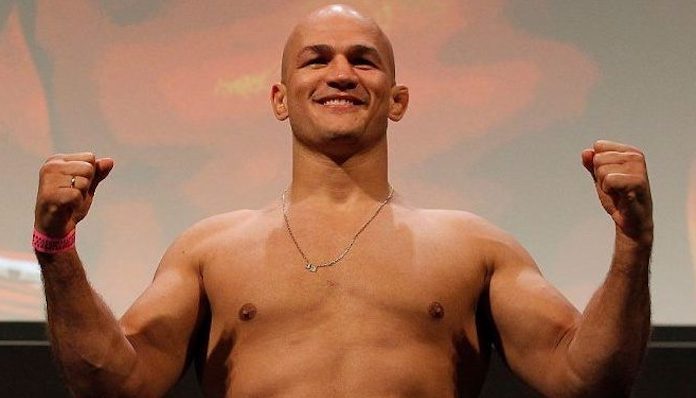 According to TMZ Sports, dos Santos has inked a deal with Triller and will debut in early 2022 (likely in February) against Kubrat Pulev. The fight will take place in Triad Combat which puts MMA fighters vs. boxers under a set of rules intended to “level the playing field.”

Junior dos Santos (21-9) is coming off four-straight stoppage losses in the UFC which in turn, resulted in him being released from the promotion. Since becoming a free agent, ‘JDS’ signed with a boxing promoter and this many expected his next fight to come in the squared circle. Yet, recently, he inked a deal with Ali Abdelaziz who quickly got him this contract with Triller.

Dos Santos last fought back at UFC 256 in December of 2020, where he suffered a TKO loss to Ciryl Gane. Prior to that, he suffered stoppage losses to Jairzinho Rozenstruik, Curtis Blaydes, and Francis Ngannou. Before his ugly string of setbacks, ‘JDS’ had won three-straight fights over Derrick Lewis, Tai Tuivasa, and Blagoy Ivanov. In his career, the former UFC heavyweight champion holds notable wins over Cain Velasquez, Frank Mir, Roy Nelson, Mirko Cro Cop, Stipe Miocic, and Mark Hunt among others.

Kubrat Pulev (28-2 in boxing) most recently competed in the main event of the inaugural Triller Triad Combat event where he TKO’d Frank Mir in the first round. In boxing, he’s the former IBF international heavyweight champion, European heavyweight title, and WBA Inter-Continental heavyweight belt.

In Pulev’s last boxing fight, he suffered a KO loss to Anthony Joshua for the WBA, IBF, WBO, and IBO heavyweight titles. His other loss came to Wladimir Klitschko for the IBF and The Ring heavyweight belt. He holds notable wins over Hughie Fury, Derek Chisora, and Tony Thompson among others.

Who do you think will win, Junior dos Santos or Kubrat Pulev?