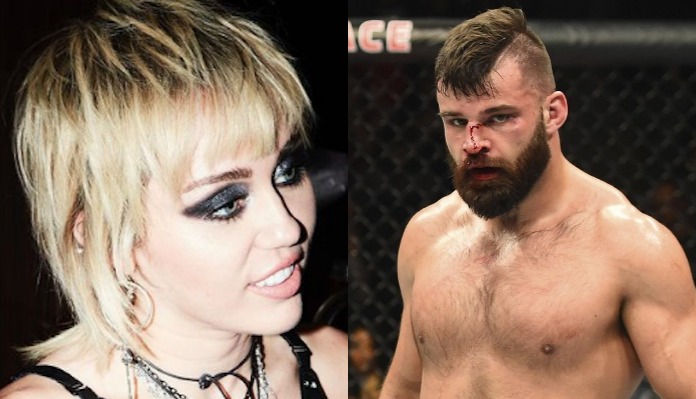 UFC middleweight Julian Marquez revealed that he’s still talking to Miley Cyrus by DM, saying that “she knows who I am (and) she follows me.”

Marquez had an unbelievable comeback at UFC 258 last weekend when he submitted Maki Pitolo in the third round of a fight he was bound to lose via unanimous decision. Not only did he have a great finish and earn a $50,000 bonus for his troubles, but he also became a bit of an overnight sensation when he asked out singer and songwriter Miley Cyrus. Marquez asked Cyrus to be his valentine and she responded on social media with a request for him to shave the letters “MC” into his chest hair. In turn, Marquez asked Cyrus to put a henna tattoo of his name on her chest, which led to online criticism for Marquez’s game.

In particular, UFC analyst Daniel Cormier had scathing criticism for “The Cuban Missile Crisis,” suggesting that he never had a girlfriend before. Numerous other fans have trolled the UFC middleweight online, but he remains determined in his cause. Speaking to James Lynch of Line Movement, Marquez revealed that he’s still talking to Cyrus via DM.

“Yeah dude, she shot me a DM. We spoke and she’s cool, man. Like legitimately, this is all like, there’s nothing crazy. Everyone’s like, ‘You missed your shot.’ Actually no, I didn’t miss my shot. I have the same exact shot as I did prior. The only difference is that she knows who I am, she follows me. Like, Miley’s a friend now. Who would have thought I would have a friend (like her). Yes, I love her. She’s amazing. Like she’s one of the greatest singers in my point of view. But like I’m not trying to date Miley. Miley’s got a bunch of stuff going on. That’s a dope friend and I’m going to keep that dope friend,” Marquez said.

We will see if the UFC middleweight ends us meeting up with Cyrus. You know that he will let his critics know on social media if the date ends up happening. In the meantime, Marquez will continue to heal up after a tough fight with Pitolo. When Marquez returns to the Octagon sometime later this year, he will likely be in line to fight someone closer to the top-15. The win over Pitolo gave him a 2-1 record in the UFC, with a prior win over Darren Stewart and a loss to Alessio Di Chirico.

Do you think Julian Marquez hangs out with Miley Cyrus?