VanZant made her BKFC debut earlier this month at the promotions KnuckleMania event. Unfortunately for ’12 Gauge’, she wound up suffering a unanimous decision loss to Britain Hart that evening.

The setback marked PVZ’s second in a row, as she was previously submitted by Amanda Ribas in her final Octagon appearance at UFC 251.

Due to the nature of the video, many of Paige VanZant’s followers were happily surprised by her change in attire following the “bang”.

“Austin Vanderford I didn’t look my dog. Didn’t know bang was going to switch to that lol.” – Woodley commented on the latest video released by Paige VanZant. 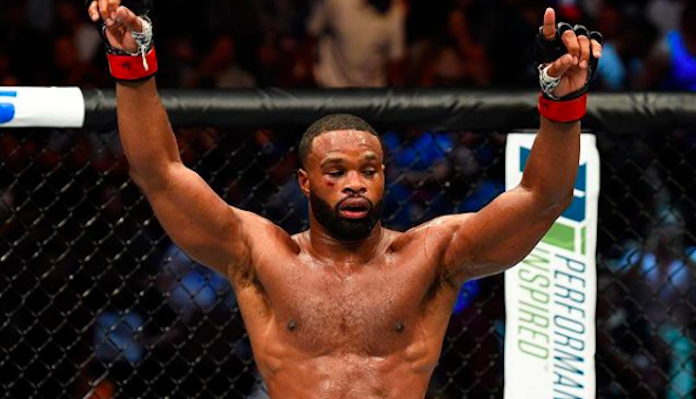 Tyron Woodley (19-6-1 MMA) recently booked his next Octagon appearance for UFC 260, where he will be taking on Vicente Luque. ‘The Chosen One’ will be hoping to snap a three-fight losing skid when he squares off with the Brazilian on March 27.

As for Paige VanZant, the 26-year-old is determined to work out the kinks and come back stronger in her next Bare Knuckle Fighting Championship appearance.

“The greatest test of courage on earth is to bear our defeat without losing heart. Last night I told my husband I didn’t want to fight any more. But as soon as the words left my lips I knew that wasn’t true. I’m a fighter. This is what I live for. Losers quit when they fail, winners fail until they succeed. That fight last night was a good learning experience for me. The timing and distance took a little bit to figure out. But I felt my last round was my best round and I’m going to build off of that! I’m thankful to fight for the best team in the world and we are going to go back and fix our mistakes. Thank you to Britain for competing last night and congrats on victory! I’m also confident we will cross paths again.” – Paige VanZant wrote on social media following her loss to Britain Hart.

What do you think of Tyron Woodley’s reaction to Paige VanZant’s latest risqué video? Share your thoughts in the comment section PENN Nation!