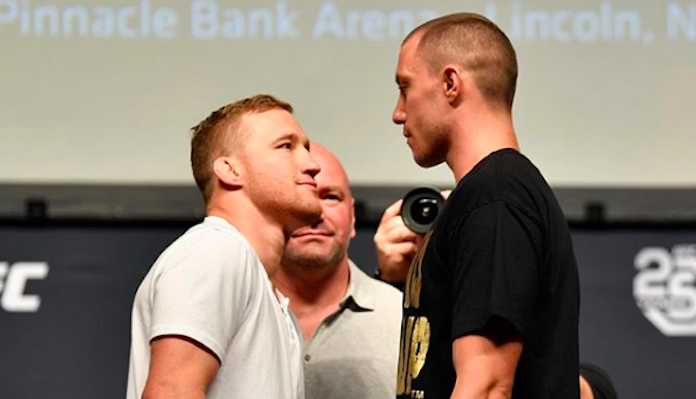 James Vick will look to turn things around at UFC Phoenix after suffering a knockout loss to Justin Gaethje at UFC Fight Night 135.

“The Texecutioner” is slated to face Paul Felder at UFC on ESPN 1 on Feb. 17 and one of the changes he’s made ahead of this matchup is how he undertakes his weight cut.

“[The Gaethje fight] was the worst weight cut I ever had in my life, I was going to die” Vick told MMANews. “It’s hard, everybody wants to say you should move up, you’re too big. But it’s hard to say that when I’ve never followed the program, I’ve always cheated on my diet and I’ve still made weight. I’ve cheated my diet every single time and I’ve still never missed weight.

“This time I made sure I’m not cheating my diet. I’m doing what I have to do.” James Vick continued. “George Lockhart is very happy where we’re at, the way my body is leaning out and everything. I’m expecting to be to be there 4-5 pounds lighter. I’ve had a problem in the past with sugar. It’s rough for me to give up food to be honest with you because that’s the only thing in life my life I haven’t sacrificed. Like I don’t drink, I don’t smoke, I don’t party. I haven’t drank alcohol in two and a half years. The only thing I have left is my diet. It’s not even bad food as far as like I can eat chicken and broccoli every day. But then I want sugar you know what I’m saying? I’ve pretty much fixed the problem.

James Vick (13-2) was riding a four-fight win streak prior to the Gaethje loss. The 31-year-old knows he can’t take unnecessary risks this time around against Felder, however he assures fan’s they will get their money’s worth.

“I see me winning this fight, I think it’s tough,” he said. “It can go several ways. Felder has never been finished, he’s no joke. I think he’s well rounded but I can win everywhere. I go to the ground we win, if we stand up I think I can win a decision in this fight. I feel like he’s going to come forward and get frustrated with my movement. I feel like I can hurt him. Joe Duffy had never been knocked out or finished before he fought me either. That being said I’m not going to take any unnecessary risks. I think I can win a decision all day against Felder. Even me moving and going that route won’t be a boring fight. It’s still going to be a super exciting fight. We could definitely get ‘Fight of the Night.”

How do you think James Vick will perform with his weight cut finally under control?