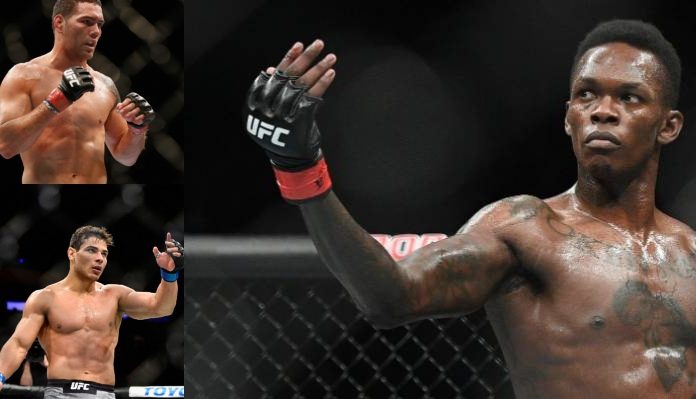 Criticism is always going to find its way to athletes in professional sports. Whether it be from fans or even peers.

At UFC 234 in Melbourne, Australia this past weekend, ‘The Last Stylebender’ Israel Adesanya headlined his first UFC pay-per-view event.

Standing across from him was none other than the legend, Anderson ‘The Spider’ Silva.

In his highest-profile matchup to date, Adesanya would shine as he earned his 16th career win as he defeated Silva via unanimous decision.

However, despite the clear victory, there were still detractors.

One of which being the former UFC middleweight champion Chris Weidman who won the title by defeating Silva himself.

“Chris Weidman, I’m overrated, but why?” Adesanya asked on The MMA Hour. “Because he beat Silva a little more handily than me? Overrated? Interesting. I can say the same thing about him, heavily. When I get this belt in my next fight, they can all line up and they can find out how overrated I am. Chris Weidman, that’s his opinion. But, I don’t have to pay attention. But, overrated is interesting.”

Weidman wasn’t the only one who had something to say about Adesanya’s performance though as the ever-dangerous Paulo Costa said that the ‘scrawny’ New Zealander wouldn’t last two rounds with him.

“Now, the juice monkey Paula,” Adesanya said. “Paula, a bitch. What did he say? See, the fight between me and Silva was physical chess on the highest level of striking. If you’re not about footwork, man, it was beautiful to watch. A guy like Paula, he’s a walking punching bag. He’s juiced up, blown up and throws body shots heavy, heavy. Bring that ass over here and I will test him.

“Uriah Hall was jabbing him up, how the f*ck is he going to hit me with those T-Rex arms? If I’m behind those jabs, things that follow up will be much, much different. A guy like that should just focus on what he gots next in Yoel Romero,”

For Costa, his next bout will be the biggest of his young and undefeated career as he takes on the most recent title challenger, Yoel Romero in the main event of UFC Miami on April 27.

Weidman, on the other hand, most recently suffered defeat at the hands of Ronaldo ‘Jacare’ Souza at UFC 230 in November 2018.