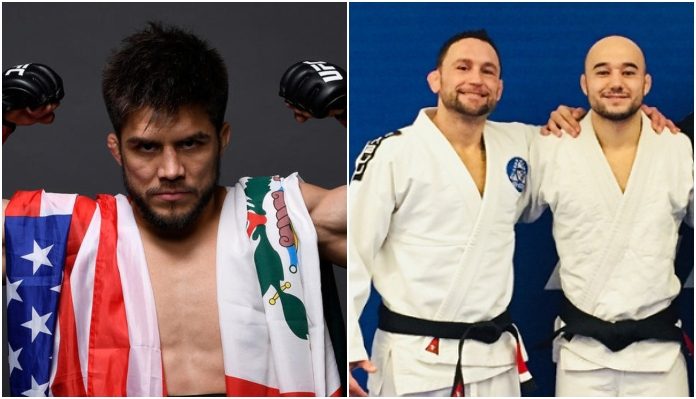 The UFC flyweight champion, Henry Cejudo has been on top of the world since he won the title August 2018. And bigger and better opportunities have only presented themselves to the Olympic gold medalist wrestler since then.

With all signs pointing to Cejudo competing opposite top bantamweight contender, Marlon Moraes for the vacant 135-pound crown at UFC 238 in June, it has prompted the flyweight king to plan out his immediate future.

Following the surprising vacating of the title by champion TJ Dillashaw due to a USADA drug test violation, both Cejudo and Moraes staked their claims for why they should compete for the title. A title that Cejudo claimed was already about to be ahead of him as the UFC was planning his rematch with Dillashaw.

After some back and forth banter on Twitter that saw Moraes verbally jab Cejudo with a comment about Nikki Bella, Cejudo let the world know his big plans for the not so distant future.

“I think now’s the time to give Marlon Moraes a message,” Cejudo started saying on Ariel Helwani’s MMA Show. “Because [the Nikki Bella comment] did sting just a little bit, it did. But Marlon Moraes I got a message for you… If you think you’re going to be the second heart I break this year, man I hope you’re ready, brother. I really do, man. I’m not afraid of you. I’m an Olympic champ, I defeated Demetrious Johnson, I defeated TJ Dillashaw, you think a World Series of Fighting former champ is gonna scare me? I’m gonna shut your lights out and I’m gonna tell you something now, I already have my next opponent in line.

“Your boy, your coach, Frankie Edgar… I know he’s gonna be there, he can get some of Cejudo too cause I will shut his lights out too. ’45 or ’35, they’ve always said Frankie Edgar can make 135-pounds, I welcome that. If the belt vacates at ’45, why not?!”

Frankie Edgar is a former UFC lightweight champion who was notoriously known for his great skill set despite his small size. Cutting almost no weight to make the 155-pound limit, Edgar would eventually drop to 145-pounds in February 2013.

The man known as ‘The Answer’ hasn’t fought below 145-pounds in his career but he has expressed interest in doing so in the past assuming that he gets to fight for a title. However, Edgar remains a staple of the featherweight title picture but with the current champion, Max Holloway moving up in weight, it leaves his immediate future in question.

“I’m on a legend rampage,” Cejudo said. “I’m here to prove I’m the best pound-4-pound fighter in the world, I’m already up there as one of the greatest combat athletes of all time, which I believe it.”

Edgar last fought in April 2018 when he scored his second career win over Cub Swanson. He was supposed to face Chan Sung Jung in November 2018 at UFC Denver but was forced out with a torn bicep.

If Cejudo gets the job done against Moraes in a seemingly inevitable bantamweight title match-up, is Cejudo vs Edgar a fight you would like to see?