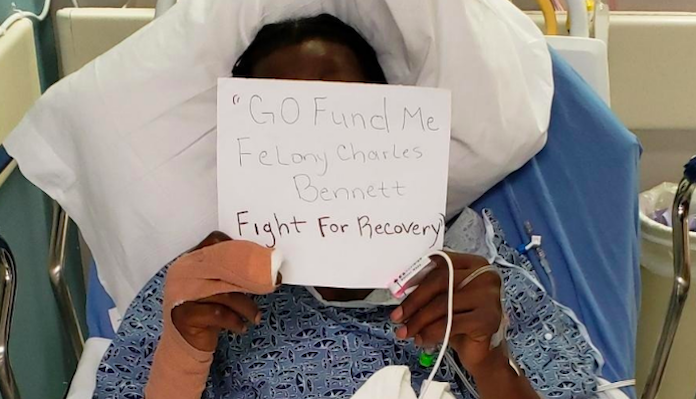 ‘Felony’ Charles Bennett, a true cult hero in the sport of MMA, needs some help.

The eccentric fighter is currently dealing with a truly nasty looking finger infection that could potential turn fatal if it’s not adequately treated.

Here’s how the GoFundMe page describes the situation (h/t StipeTapped.com):

On July 2nd of 2018 Felony took on James Freeman in an MMA bout at the Island Fights promotion based in Pensacola, FL. Felony hit freeman across the head with his right knuckle and caused a small fracture (shown in x-ray photo). Meanwhile Felony was making big moves and had signed to fight with the BKFC (Bare Knuckle Fighting Championship).

Felony made his bare knuckle boxing debut two months later on August 25th with his already injured finger. He didn’t realize his finger was broken until well after the Island Fights event was over, and without health insurance he toughed it out and fulfilled his obligation to fight at BKFC2.  He severely injured his finger even further during the fight and subsequently suffered from a “boxer’s fracture” break in the other hand while pushing through the event.

Due to the hard times Felony has fallen financially. He made one more go in MMA with his injured hands on 12/01/18 which i cornered him for.  The fight didn’t go our way.

Felony is suffering from Chronic Mallet Finger along with a severe bacterial infection inside the bone which can eventually become deadly if untreated.  His other manager Jason and I were able to get him subsidized insurance and start the process of getting him treated. It is a VERY expensive procedure that insurance will cover a good portion of, but not all…

Please donate to this GoFundMe campaign to help get our beloved & favorite ‘Felony’ back on his feet swinging and provide the treatment he urgently needs. We all love seeing him fight and being the hilarious guy he is on his YouTube channel (YouTube.com/FelonyCharlesBennett).

Funds will help pay for the upfront costs for surgery, heavy antibiotic regimen, physical therapy, medications, and subsequent medical bills to come that are not covered by insurance.

You can also donate and help by purchasing merchandise from his Teespring shop listed above if you would like something in return.

To donate to this cause, follow this link to Felony’s GoFundMe. Be warned, this page contains images of Bennett’s finger, and it’s not pretty.