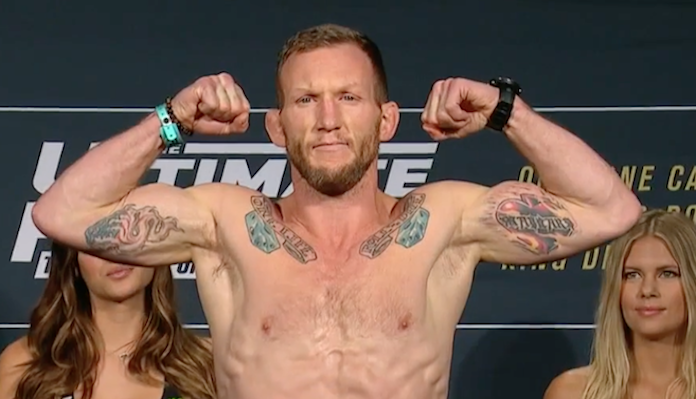 Maynard made this comparison in a fantastic interview with Steven Rae of The Body Lock.

In this interview, Maynard dove into the topic of fighter pay, explaining how fighters will often be forced to sign unfavorable contracts and kept quiet with unpredictable backstage bonuses.

“People have no idea how ruthless this sport is business-wise,” Maynard told The Body Lock. “I mean people have no idea. We’re kind of like strippers – we get tipped out and we get a shitty pay.

“That was kind of how it worked,” Maynard added. “We had a bad contract, but that we would get a little bit of money afterwards and it was like what is this, a tip? You can’t guarantee us this cash? It happens all across the world its not just here. Promoters just get that power and all the guys just turn into numbers, they constantly think ‘how can we make the most off him.’

“It’s the wild, wild west man, the wild west. We don’t know the numbers and everybody’s just trying to get what they can get on a small portion and not looking at the big picture.”

Maynard is not the first fighter to mention these shady UFC practices. UFC light heavyweight champion Jon Jones also eluded to these practices on Twitter recently, explaining how a gifted Bentley encouraged him to take a fight with Lyoto Machida.

“Impressed a young kid with a Bentley to fight Lyoto Machida while they collected millions,” Jones wrote on Twitter.

Maynard also explained how many fighters are pushed into long-term contracts that can wind up eating up big chunks of their careers.

“Dana [White], he locked me into an eight-fight contract back in 2014,” Maynard said. “There was no place to go at that time, no place to kind of bargain with. Bellator didn’t have [Scott] Coker as the president, he wasn’t in charge.

“[Former Bellator President] Bjorn Rebney was kind of iffy, I heard bad reviews but there really wasn’t anywhere to go and that was pretty much my whole career,’ Maynard added. “The UFC bought out everybody, you know, so there was no real negotiating to be done with them.”

“I thought I could rattle [the fights] off pretty quick.”

Gray Maynard is no longer with the UFC, but is not officially retired.

“I’m not retired,” he told the Body Lock. “Maybe I have one fight left, maybe I have three fights left, but I want it done right.”