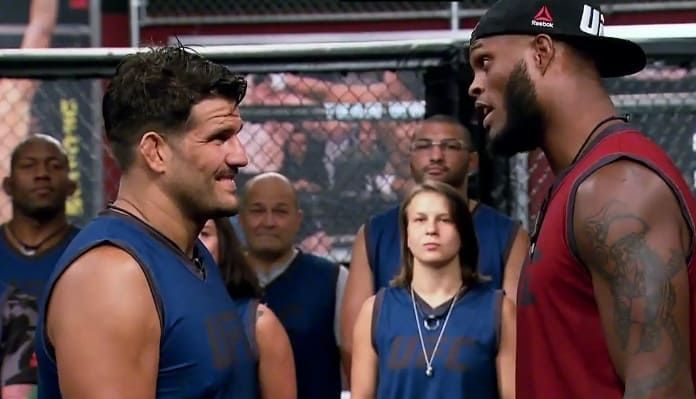 On The Ultimate Fighter 28 the biggest rivalry of the season is between Juan Espino and Maurice Greene. The two simply hated each other and got into several verbal exchanges in the house. As well, they nearly got into fights at the gym and in the house.

Luckily for them, they get to settle their differences inside the Octagon when they fight each other in the semi-finals. The outcome of the fight will be revealed on Wednesday’s episode.

Even after fighting each other both have little respect for each other. Maurice Greene told BJPENN.com that Espino was the cause of the problems and that he was a ‘big ogre.’ However, Espino disagrees with that completely.

“Before the house, we got along well. Inside the house, everything went well, even when we put some rules of respect for the house,” Juan Espino said to BJPENN.com. “He was the first to skip them all. I understood the stress that every fighter faced. It is true that my character changed. We had some friction in the house but I did not take it seriously because I understood the stress of it all. But when he started insulting me one day everything changed.”

Both Greene and ‘El Guapo’ claim the other was the main reason for their rivalry. During the show, Greene seemed to get angry at Espino for the way he acted and thinking he is better than everyone else. However, Espino doesn’t understand where that is coming from as he believes every other contestant liked him, while no one respected Greene.

“I consider myself a respectful person and have a good relationship with practically all of the participants of the show, as well as the people who worked on it. I was never going to hit him inside the house,” Espino said. “Although he thinks it was my strategy to say my achievements, it was not. I think it’s better to surprise and not scare, that’s very amateur. Intimidating me is what he tried to do but he did not get far.

“I am not a saint. What happened is that his behaviour was so stupid that it made me look much better,” Espino continued. “I do not know why he was talking about my hair. He has so many physical and mental faults that it would be very easy for me to humiliate him. Look at the face of your team when we fought, you did not have the support of any of your teammates. I am a gentleman and I will not tell you who, but before we fought, someone on your team told me to teach you a lesson.”

Even though their rivalry was emotionally taxing, Espino is glad he participated on the show. ‘El Guapo’ believes the experience on TUF made him a better fighter.

“Without a doubt the experience was incredible and I had a great time,” said Espino. “I want to get to the UFC and I’m on my way. ‘El Guapo’ is coming.”

Espino knows he has what it takes to be a UFC fighter. No matter the outcome of the show, he will continue to work on getting better, and that is thanks to Robert Whittaker and his coaches.

“Robert is a person who helped me a lot,” said Espino. “I liked the way he did things. I think his coaching has reinforced me the most as a fighter.”

Juan Espino and Maurice Greene’s fight is easily the most anticipated of the season, and both fighters encourage fans to watch it as they say it was an exciting fight. Catch it on The Ultimate Fighter on Wednesday.