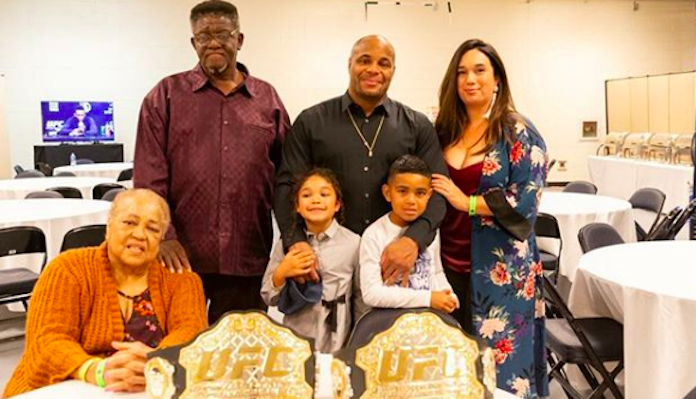 UFC light heavyweight and heavyweight champion Daniel Cormier has brought his wife and children to his last three fights. All three of these fights, of course, wound up being dominant stoppage victories for the two-division champ, which his family, and particularly his children, were very excited about.

Apparently, however, Daniel Cormier’s daughter as a tough time watching her Dad beat people up. Speaking on MMAjunkie Radio recently, Cormier divulged that his daughter felt bad for his latest opponent, Derrick Lewis, and had a tough time stomaching the whole scene.

“I think my kids love the fights,” he said. “They love the excitement of the arena. They’ve been to the last three. They love that, but they also don’t love the other side. Like, my daughter doesn’t love the other side, man. She was in the press conference area waiting for me to go, and Derrick went in there, and he was in the same area of my kids. And my wife said she saw him, looking over there, my little girl, and Derrick was kind of standing there with his head down. (My daughter) goes, ‘Mom.’ And my wife goes, ‘What?’ She goes, ‘I feel really bad for Derrick. He looks sad.’ So, like, they got to see the other side. And I don’t think my daughter likes that, man. She’s very sensitive. I don’t think they’ll be calling for Dad to even fight again. Because they also saw me on the other side when I lost to Jones (at UFC 214), so they know the ups and downs of the fight game.”

What do you think of this rather touching story from the UFC light heavyweight and heavyweight champion Daniel Cormier?