Conor McGregor is the king of charisma whose greatness transcends the UFC. His legendary wins bestowed him two-division gold belts and a sporting legacy that is unparalleled. But as the tales of great mythology go, has the man’s obsession with power and fortune derailed his kingdom reign?

‘The Notorious’ entered the Octagon as a working-class Irish man from Dublin who was cashing in welfare cheques before making his official debut.  The self-assured and captivating fighter had garnered a cult following during his early days at Cage Warriors. Fans were enamoured with his disruptive presence and irrefutable talent that eventually commercialised the sport throughout Ireland. He became a hero for the blue-collar man and took great pride in fulfilling the role.

Conor McGregor became a beacon of hope for the Irish youth and relished the opportunity to inspire fighters from difficult upbringings. He won the hearts of fans across the pond too who were fascinated by his magnetic aura. His first appearance on Ariel Helwani’s MMA hour was dubbed the best MMA interview of all time and Dana White called McGregor his Mohammed Ali.

The rising star soaked up the media spotlight, using every opportunity to collect his Irish tribe and head to war. Conor McGregor used his talent to overcome adversity in life, and his fights were the ultimate example of that. The versatile range of techniques he used in his battle against Diego Brandao in Ireland perfectly displayed his dedication to the sport. He secured a dominant first-round finish that electrified the onlooking crowd. By this point, McGregor had already polarized fans with his abrasive and cavalier demeanour. But nevertheless, fans or haters couldn’t dispute his noble commitment to the cause.

Even when trash-talking or suffering defeat at the hands of opponents, McGregor respected the outcome. When Nate Diaz beat ‘The Notorious’ at UFC 196, McGregor was humbled and praised the ‘Stockon Slapper’ for his performance,

“I’m humble in victory or defeat. I respect Nate, he came in, he took the fight on short notice. He came in at 170 and did the job. He was efficient, I wasn’t efficient,” said McGregor.

For fans, McGregor showed true strength of character when it counted, a true hero for the everyday man.

On his road to success, there were bumps along the way that caused controversy. During the UFC 189 press conference, McGregor stole Jose Aldo’s title belt from his table, joked around and laughed in his face. He also made several offensive comments. However, viewers were ultimately amused by his boisterous school-boy demeanour that seemed more fun than harmful. In contrast, McGregor would show compassion in times that would matter; supporting a fan with leukaemia; inspiring young Irish talent and being a rock to his friends and family. All of which were golden in the eyes of his fans and represented core values that negated outrageous behaviour.

McGregor’s use of mental warfare demonstrated at press-conferences was a psychological reflection of his fighting dominance. He would often dismantle opponents through language before reaching the octagon. No-one could deny the Irish man’s talent for getting in the head of his opponents. He would use this to make reads of them during the fight, and give scarily accurate fight predictions, earning him the nickname ‘Mystic Mac’.

The psychological and physical dismantling of opponents is something that Conor McGregor has perfected, yet there is a line that should not be crossed. In a sport which balances conflict and respect against dyer physical damage, there must be boundaries honoured (inside and outside the Octagon). As McGregor’s popularity grew, the lines began to blur.

It’s hard to pinpoint the moment that the tides turned for McGregor, but the lead-up to his fight against Eddie Alvarez for UFC 205 was a pivotal moment. Conor McGregor arrived late to the pre-fight press conference and attempted to throw a chair at his opponent. It seemed his wild showmanship had shifted from being a tool to disarm opponents. Instead, metamorphosing into a performance to feed his own ego. Strolling into the event wearing a white mink coat and red polo neck, McGregor seemed more like a GTA character than the Irish cheeky chappy fans loved. 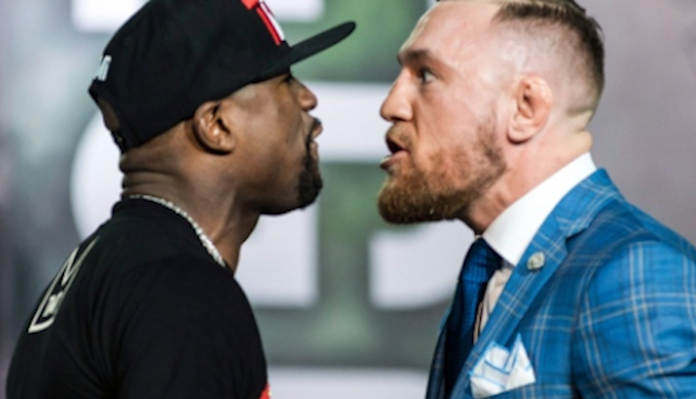 In the lead-up to his boxing bout against Floyd Mayweather, it was hard to distinguish between McGregor’s mental warfare and confidence, or complete disregard for his opponent’s ability. Fans always love a rag to riches story, but by this point, ‘The Notorious’ incessant talk of money and showman gimmicks began to rub some fans the wrong way. His dedication to training was still undeterred, but the apparent distractions of power, fame and fortune were noticeably seeping through the cracks.

After delivering a valiant performance but nevertheless losing to Mayweather, McGregor’s next landmark fight would be UFC 229 against the undefeated lightweight champion, Khabib Nurmagomedov. The rivalry between the fighters escalated to a point that shocked his most loyal fans. Conor McGregor took his hatred for his opponent to the next level by throwing a dolly at a bus in hopes of injuring Khabib Nurmagomedov inside. He smashed the window injuring Michael Chiesa and other passengers. The onslaught didn’t end there. During a press conference, McGregor would take aim at Nurmagomedov’s wife and religion whilst shamelessly promoting his whisky venture. Whilst some fans were enthralled to see Conor being his usual controversial and antagonistic self, this time it seemed different: McGregor seemed consumed with his dislike for Nurmagomedov and lacked control. This appeared again in his Octagon performance against ‘The Eagle’ where ‘The Notorious’ lacked the level of fighting control and composure that fans were used to seeing. It seemed his rivalry with Nurmagomedov overshadowed his technical ability, and his creative attacks suffered as an expense. Equally in real life, the Irish star’s focus on fighting was arguably overshadowed by other opportunities and the pursuit of fortune. Throughout the press coverage, ‘Mystic Mac’ expressed the same sentiments from his early fighting days and maintained a carefree demeanour, but it had lost part of his magic in a situation fuelled by hatred and fame.

The lack of control culminated last month when footage showed Conor McGregor punching an elderly man in the face after he allegedly refused a drink of McGregor’s whisky brand. Even for fans who excused his prior behaviour, they struggled to justify the attack that hit close to home (both literally and metaphorically.) For many loyal fans, it was a wakeup call that McGregor was no longer the charming working-class boy with a lion heart that represented a nation. Ireland had lost it’s Peter Pan.

Fans were originally drawn to Conor McGregor because he rebelled against authority: he ignored media obligations and set his own rules. But his rebellious nature lost its appeal for some fans when it targeted everyday people. Whether it’s an old man in a bar or a phone smashing altercation with a fan, McGregor’s energy had become misdirected. He was now hurting the people who were the very reason for his success.

It’s undeniable that he is an innovator in the sport and has pushed boundaries like no other. As a result, the UFC has made many allowances for his behaviour. By the same token, the allowances have undermined his integrity because McGregor’s own perception of boundaries have slowly eroded. And in this regard, it is not just McGregor who should take accountability, but rather the whole MMA sphere. As witnessed in the star’s early UFC interviews, Conor McGregor was the commander of his ego. Now it seems he is the prisoner of it.

Now McGregor’s future remains uncertain. He hasn’t fought since his 2018 loss against Khabib Nurmagomedov. He announced retirement earlier this year but changed his tune and teased a return later this year. No official opponent is set in stone and Dana White has dismissed some of Conor McGregor’s twitter claims including a December return to Dublin.

The treatment of his next fight and opponent will fundamentally affect his legacy in the sport. If he wins his next fight, Conor McGregor can potentially redeem any fans fallen to the wayside. If ‘Mystic Mac’ loses, he could dramatically affect his perception from fans forever. The scary possibility is that his trash-talking and whisky promotions will have greater longevity than his UFC fights. Conor McGregor could be remembered as a UFC product as opposed to a fighter first and foremost.

McGregor’s behaviour polarizes opinion. In the face of his changing demeanour, fans hold onto his inextricable talent and Irish lineage that united a nation. On many occasions, the star has shown strength of character when it mattered. But for some fans, his pursuit of fortune and power has eclipsed his humility and relatability that they initially fell in love with. The gold he has earned in his career has come at the expense of gold in the hearts of his fans: The gold that earnt him the crown as the Irish King.