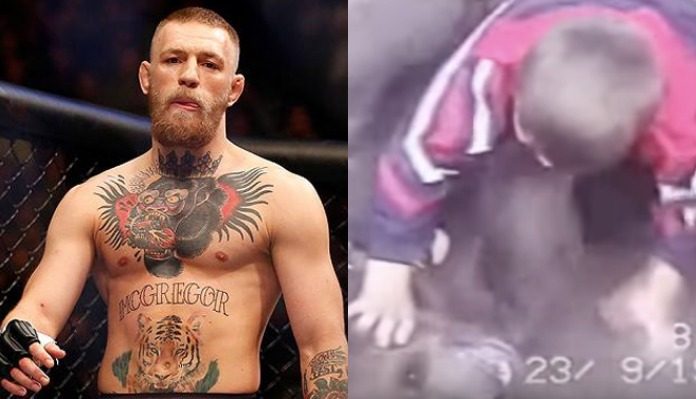 UFC lightweight champion Khabib Nurmagomedov is a scary opponent for a number of reasons. There’s his flawless, 26-0 record. There’s his stifling top game and the fact that he often talks to his opponents while he’s burying them under a meteor shower of ground and pound. And then there’s the fact that he wrestled a bear when he was a child.

No, that’s not just some fabricated part of the Khabib Nurmagomedov legend, it’s a real thing that actually happened. There’s video to prove it.

While the fact that Khabib Nurmagomedov was wrestling bears before he was old enough to drive is pretty daunting, his next opponent, former UFC lightweight and featherweight champion Conor McGregor, is not too worried.

Speaking on CONAN this week, Conor McGregor assured that wrestling a Dagestani bear is nothing like wrestling an Irish gorilla, which is what the undefeated champion is apparently in for at UFC 229 this Saturday night.

“He may have wrestled Dagestani bears, but he has never wrestled an Irish gorilla, Conan, and that’s what he’s about to face.”

Conor McGregor also gave an assessment of Khabib Nurmagomedov’s skillset, and explained why he’s the man to end the champion’s undefeated streak.

“I believe he has many weaknesses in his game,” McGregor said. “The Dagestan region specializes in wrestling. The kid wrestled bears when he was a baby. It’s part of their culture. I am under no illusions, he is a skilled wrestler. Of course, fighting in the whole picture, there’s many more facets to fighting. A lot more than one single discipline. Thankfully now I’m not specific ruleset similar to my last match [with Floyd Mayweather]. I am free fight as I please. So that’s what I will do. I have many, many weapons to dismantle all styles of opponent. This is just another style of opponent. I believe he’s slow, flat-footed. His striking is very average, and I look to expose that on Saturday night.”

Do you think Conor McGregor can take out the bear-wrestling Khabib Nurmagomedov this Saturday at UFC 229?