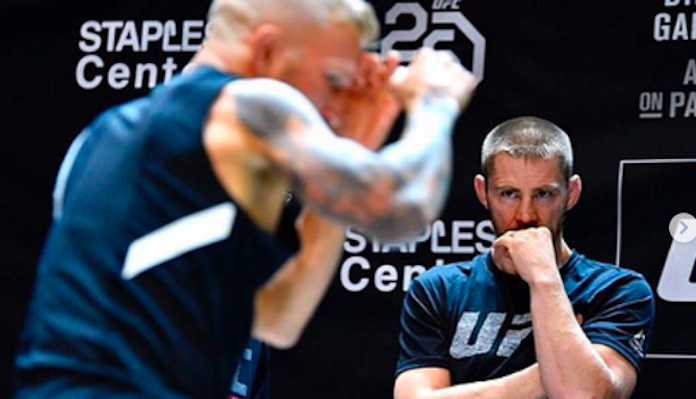 Yesterday afternoon, former UFC bantamweight champion TJ Dillashaw was hit with a two-year suspension from the United States Anti-Doping Agency (USADA) after testing positive for recombinant human erythropoietin (EPO), a substance that can only be injected, and is therefor not taken accidentally.

Speaking on Instagram, Duane Ludwig, the long-time handler of TJ Dillashaw, issued a quick statement on the situation. He referred to Dillashaw’s EPO use as “inexcusable” but vowed to stand by his student.

“He is not the first nor will he be the last but yes it is inexcusable! People make mistakes BUT he’s still my Ninja! #StillMyNinja #KillaShaw , -He that is without sin among you, let him cast the first stone.- Jesus Christ,” – Duane Ludwig on Instagram

Nutritionist Sam Calavitta also commented on the TJ Dillashaw situation in a much longer statement. See what he had to say below:

“It is with a heavy heart that I, Coach Cal, the owner, found and purveyor of The Treigning Lab, Ben recently seen the defeat of one of our family members in recent months. This defeat is not due to the skills and combat savvy of an opponent of flesh, but rather a defeat at the perilous hands of a far more sinister foe; the demon of self doubt which haunts each and everyone of us at one time or another in our lives.

“As a man of few words, preferring passion and belief as a shield to be carried out upon, I am bemused to careless and reckless dialogue for no other purpose than to make myself heard among the masses plagued by willful ignorance. However, this is an appropriate, and even required time for the head of a family to speak out. And this, is such time.

“The Treigning Lab in no way condones or encourages our family of athletes worldwide, to partake in the perilous downward spiraling helix of synthetic performance enhancement. To do so is not only harmful to the individual but also harmful to the brothers, sisters, and other family members who are judged guilty by association.

“Yet, the arena of public scrutiny is heavily weighted down by the enigma of fear for what one does not understand. To that end, the fact remains that The Treigning Lab, in concept and private practice established itself among Olympic and Collegiate athletes in 2001 and embarked on the life changing journey through sport with thousands of athletes spawning almost two decades of unparalleled excellence. We use quantitative analysis, metabolically accurate nutrition, proper supplementation, recovery facilitation and a training regiment of such high intensity that few have the wherewithal to imagine, much less dare to embrace. In the same amount of time our athletes have never failed a single mandated test, yet reside among the elite of their chosen sports; standing at the top of the podium in character and integrity.

“The Treigning Lab was built on the foundation of integrity, hard work and most importantly family. So in light of recent events The Treigning Lab and its affiliates would first like to thank USADA for upholding the standard of sterling athletic practices and offering tests to ensure the safety and fairness of competitive sports. Tha being said we would like to thank all of those who have come forward during this time to show genuine concern for all of our athletes, including TJ Dillashaw, a fallen soldier of the battlefield of public expectation and demand for perfection. Although not right, and inexcusable, TJ Dillashaw succumbed to the relentless pressure win at any cost for the purpose of appeasing his employers, pleasing his fan base, and providing for his family; a sentiment that we can all relate to.”

At present, TJ Dillashaw has not commented on the situation. That being said, he is bound to soon.