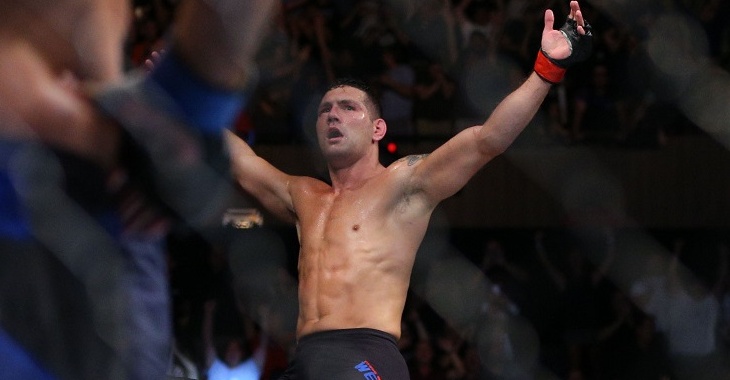 Chris Weidman has confirmed that he’s looking for a return to the Octagon. It’s also coming a lot sooner than a lot of fans might’ve anticipated.

Weidman is coming off a brutal leg injury sustained last year at UFC 261 in April. Facing off against Uriah Hall in a highly-anticipated rematch, they were only seconds into the fight when it ended. The former UFC middleweight champion shattered his leg after Hall checked his kick, ending the bout.

With such a brutal injury and Weidman approaching his 40s, many wondered if he’d ever return to the cage. Now almost a year later, the 37-year-old has confirmed his intention to return to the cage in an interview with MMAFighting.

To top it off, he said he’s aiming to be in the cage by June. The reason is that he’s trying to get back to completion before he turns 38.

“I want to fight before I turn 38 in June. That’s my goal. I hate seeing the older age on the screen when I get introduced. I’ve always been like that, even when I was in my 20s. I don’t want to be 29, I want to be 28 for the next one. So I still have that in me a little bit, now I’m just way older. So if I could fight around early June, that would be great. Again, there’s a lot in the air and it’s very unpredictable.” – said Chris Weidman on MMAFighting’s Writer vs. Fighter podcast.

If Weidman is able to get back into the cage, he’ll have beaten the odds. However, he still faces a big challenge moving forward.

Weidman is currently 2-5 since losing the UFC middleweight championship back in 2015. With the injuries and age mounting, it’s unlikely that he’ll get back into title contention. However, if there’s anyone that could do it, it would be the New Yorker.

What do you think about Chris Weidman returning to the UFC?