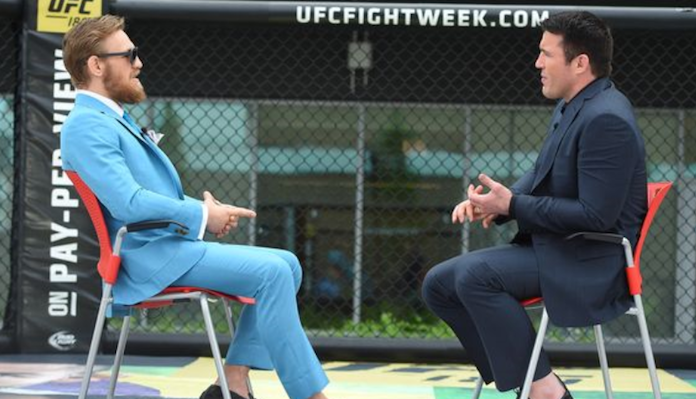 Last weekend, shortly after Khabib Nurmagomedov submitted Conor McGregor in the UFC 229 main event, a massive brawl broke out between the two fighters’ teams. Nurmagomedov leapt over the side of the Octagon and attacked McGregor’s training partner Dillon Danis, while McGregor got into it with several of Nurmagomedov’s teammates inside the cage. It was a scene of pure, unbridled chaos that took several minutes to quell.

Ever since this incident, the MMA community has been struggling to assign blame. There are some fans that believe that Khabib Nurmagomedov started it all by jumping over the cage and attacking Dillon Danis. There are others, meanwhile, that feel that Conor McGregor deserves the blame because he threw the first clearly visible punch of the skirmish.

Bellator star and MMA analyst Chael Sonnen has heard both sides of this blame game, and he’s got a message for anyone who questions McGregor’s choice to throw a punch after Nurmagomedov attacked Danis. In Sonnen’s eyes, McGregor had every right to uncork a punch, and he cannot be blamed for this post-fight brawl.

“First up, they can shove it up their ass,” Sonnen told MMA Fighting during the Bellator 208 media day on Thursday (transcript via Bloody Elbow). “That whole thing was created by some wimp somewhere about ‘the other guy has to throw the first punch.’ If you’re engaging me aggressively, and I let you within an arm’s reach, I’m a sucker if I allow you to throw the first punch.”

“The first thing you do – and remember this, if your dads weren’t smart enough to tell you. If you learned how to fight from your moms, or from your wimpy teachers in your liberal school district, you don’t let somebody get within an arm’s reach of you when they got that look in their eye. You keep them back, and if they break the distance, you always hit them first.”

“Conor McGregor had every reasonable right to throw at him, and that did not start the fight. Khabib had flown over the Octagon and thrown a jumping kick at into Dillon Danis. So, first off, your facts are wrong that Conor threw the first punch. It’s factually incorrect.”

“Secondly, the unified rules state: ‘You protect yourself at all times.’ Conor was where he was supposed to be, in an Octagon, protecting himself against somebody who had come in to do him harm.”

What do you think of this argument from Chael Sonnen? Did Conor McGregor have a right to throw the first punch of the infamous UFC 229 post-fight riot?