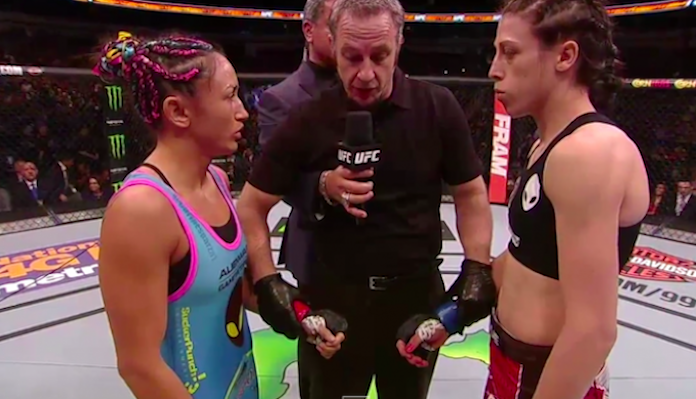 For the former UFC strawweight champ, the pressure was on heading into this fight, as another loss would have equated to a three-fight skid.

“When I was in the locker room, like … shoot, shoot,” Esparza told MMA Junkie post-fight. “I’ve never come off two losses before. I’ve never had two losses in a row. So, for me, that third one, I kept telling myself, ‘You cannot lose this fight no matter what.’ I was willing to go in there and go through anything to get that win.”

In the end, Carla Esparza got the victory she needed. And now, she’s looking for another big fight in the talent-packed UFC strawweight division. In fact, she’s hoping to avenge one of the toughest losses of her career, a 2015 TKO loss to Joanna Jedrzejczyk, which forced the end of her reign as UFC strawweight champ.

“Honestly, I’ve thought about that a lot since the fight happened,” Esparza said. “Not to take anything away from her win, but I really wasn’t in the best place. I think she’s gotten better, I’ve gotten better, and I would definitely be welcomed to that fight again. No matter what happens in that fight, it would be a much different fight than it was the first time.”

Would you be interested in a 2019 rematch between Carla Esparza and Joanna Jedrzejczyk?