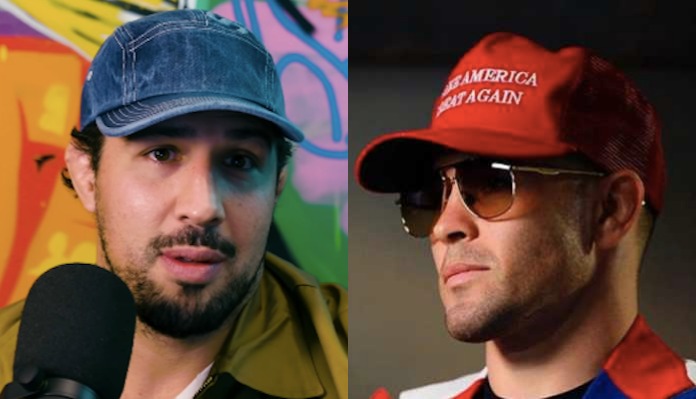 Colby Covington is arguably the most polarizing fighter in MMA today. While he’s certainly got his fair share of fans, he’s also got legions of haters, and those haters have been very vocal since he lost to Kamaru Usman at UFC 245.

Former UFC heavyweight Brendan Schaub, who now makes his living as an analyst and podcaster, believes Covington’s haters need to give it a rest. He feels that, because Covington’s persona is manufactured, fans should go a little easier on him.

“I think a lot of times too because of Colby’s antics, and he did it to attract fans and he did it for this exact reason he wants you to hate him so you tune in to see him lose,” Schaub said of Covington (transcript via MMA News). But that being said, you realize he’s just playing a character. That’s like getting mad at Robert De Niro for playing The Irishman when you see him on the street. Like, ‘what the f*ck dude?!’ He’s like, ‘what? That’s a character.’”

Covington, an outspoken supporter of Donald Trump, sustained a broken jaw in his loss to Usman, which prompted Twitter users to start using the hashtag #MAGAJaw. Schaub was not impressed by this display.

“For Colby it’s a character, he just happens to be the most hated character and rides with Trump,” Schaub said. “Obviously there’s the issue with Trump being the president and the moves he makes. But if you ask Colby like, ‘hey man what do you think of the stuff going on with Trump right now with impeachment?’ Or you ask him on his immigration laws, he doesn’t know. It’s just a bit, man. It’s just a bit. So when you can take that out, which for a lot of people is hard to do, and look at Colby as an athlete as a fighter he’s f*cking good man. He is damn good. He’s very, very, very good and he showed it. To me the narrative isn’t that Colby lost, the Trump kid lost, the big-mouth kid got his jaw broke. And I hate the f*cking #MAGAJaw. Grow up. But the thing to me, the narrative of this is how good is Kamaru Usman? He is so god damn good.”

Do you agree with Brendan Schaub’s comments on Colby Covington? Is it time for fans to “grow up?”