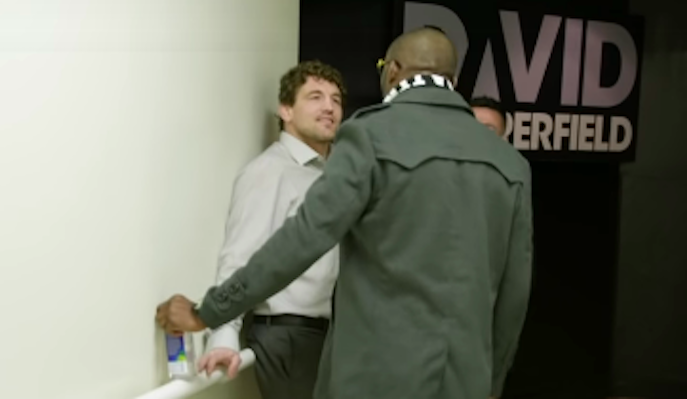 Ben Askren continues to wreak havoc both inside and outside of the octagon, with his latest target being newly-crowned UFC welterweight champ Kamaru Usman.

“Funky” made his highly anticipated octagon debut earlier this month at UFC 235, where he scored a controversial submission victory over former division title holder Robbie Lawler.

After being dominated by “Ruthless” in the early moments of the fight, Askren was able to score a takedown and looked to setup a rear-naked choke. When Robbie scrambled in an attempt to get free, Askren transitioned into a bulldog choke. It was at that moment that referee Herb Dean thought he saw Lawler’s arm go limp, and so he stepped in and stopped the fight.

Obviously not quite the storybook ending Askren was hoping for his UFC debut, but nonetheless a win is a win.

Robbie Lawler’s Team are not ruling out an appeal reagarding the official result in his fight with Askren at UFC 235.

Later that same night, in the co-headliner of UFC 235, Askren’s friend and longtime teammate Tyron Woodley put his welterweight title on the line against Kamaru Usman.

Unfortunately for “The Chosen One”, things did not go as planned last weekend in Las Vegas.

While many praised Usman for this UFC 235 title-earning performance, Ben Askren was singing a different tune.

Askren accused Usman of putting on a boring performance against Woodley shortly after the bouts conclusion.

Most recently, Ben Askren took things a little further vowing to retire if he suffers a knockout loss to Usman.

“If Marty KO’s me I would KO literally retire, look at his record he can’t punch worth a damn.” – Ben Askren

The undefeated welterweight, Askren (19-0 MMA), also revealed that he believes he could submit the “Nigerian Nightmare” with ease.

For now, it appears that Kamaru Usman’s first challenge as champion will come in the form of Colby Covington.

Covington has not competed since UFC 225 in June of 2018, where he defeated Rafael dos Anjos to capture the promotions interim welterweight title.