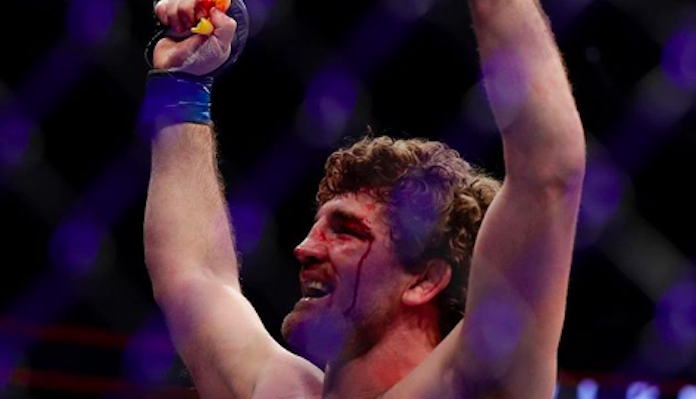 The history-making trade is a done deal. Former UFC flyweight champion Demetrious Johnson has been sent to ONE Championship in exchange for former ONE welterweight champ Ben Askren.

Strangely, however, the UFC has still not officially announced the signing of Ben Askren. This has the former ONE welterweight champ wondering if the promotion is embarrassed.

Hey @ufc are you gonna make an announcement? You are like that guy with a GF who’s embarrassed to tell his buddies even when everyone knows! Ha ha ha you know you love me.

“Hey [UFC] are you gonna make an announcement?” Ben Askren queried on Twitter. “You are like that guy with a GF who’s embarrassed to tell his buddies even when everyone knows! Ha ha ha you know you love me.”

While the UFC has not yet announced Askren’s signing, UFC President Dana White has recently discussed the options for the undefeated star’s UFC debut, which would imply there’s no cause for worry.

“I don’t know [who he’ll fight], we’re still working on it,” Dana White told TMZ this week. “Obviously, he’s going to come into the welterweight division, 170 pounds. He’s undefeated, he’s [ONE Championship’s] champion. We’re excited about it. He’s definitely going to fight somebody in the top five.”

That being said, it is a little strange that the UFC is yet to announce Ben Askren’s signing. ONE Championship, after all, did not delay in announcing that Demetrious Johnson had joined their roster.

Why do you think the UFC has held off on announcing Ben Askren’s signing? Perhaps they’re waiting until they’ve found him an opponent?