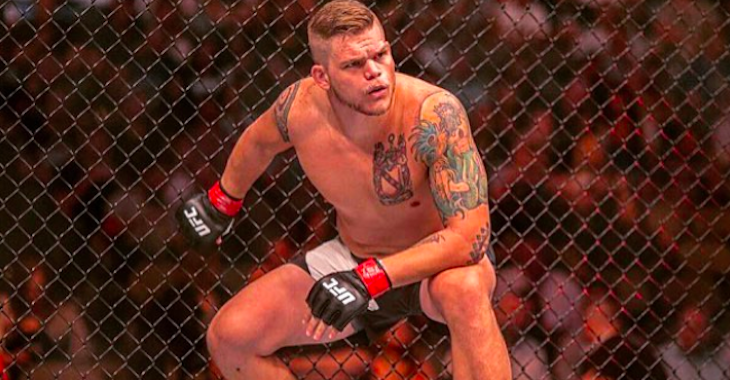 Chase Sherman enters tonight’s contest on a two fight losing skid. His latest setback came to Justin Willis via decision this past April in Atlantic City.

Round one begins and Sakai comes out with immediate pressure. Sherman is popping his jab out there and the lands a nice body kick. Sakai returns fire with a hard leg kick of his own. Sakai with a pair of low kicks and Sherman answers with one of his own. Sakai with a right hand but Chase counters with a combination. Sakai with some wild hooks that both appear to land. Sherman smiles and fires off a body kick. Both men are trading punches in the pocket now. Sakai with a pair of right hands that appear to stun Sherman. Augusto moves forward but Sherman catches him with an elbow while entering the pocket. A left hook now from Sherman. The horn sounds to end round one.

Round two begins and Sherman lands an accidental eye poke that causes a stop in the action. We restart and Chase Sherman lands a jab with a left hook behind it. Sakai with a right hand but Sherman counters nicely with a knee to the body. Sakai is winging hooks now looking for a fight-ending punch to land. Sherman with a jab. Augusto Sakai responds with a crisp combination. Chase with an uppercut. He lands a nice right hand that sends Sakai up against the cage. Augusto wings punches from the position. He lands a big uppercut and Sherman is hurt. Sakai lands another right hand and Sherman leaps in for the clinch. A knee from Augusto breaks Sherman’s hold. Hard body shots now from Sherman. Augusto lands another good uppercut. Round two comes to an end.

Round three begins and Sakai lands a pair of kick to the body and then just misses with a high kick. Sherman fires off a pair of power shots by neither strike finds a home. Sherman pushes forward with an uppercut. Augusto responds with a nice three punch combination. Sakai with a big right hand now. Sherman is rocked. Knees to the head and body from Augusto to Sherman now in the clinch. Chase is hurt bad. Sakai throws him to the floor and winds up in side control. He bashes him with elbows and then switches to hammer fists. This one is all over.

lol did he chop off his head and punt it away??? #UFCSaoPaulo pic.twitter.com/atB0enm4g6