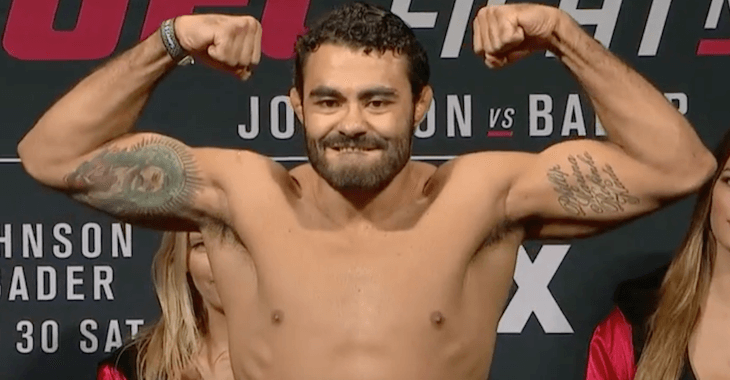 Round one begins and Casey presses forward with left hands. Natal responds with a leg kick. Big over hand right misses for Kevin. Good leg kick for Casey followed by a left hand. Natal shoots for a takedown. Casey stuffs the attempt. Casey now working on a single-leg takedown. Natal shakes him off and they break. Big right hand from Casey misses. He tries an uppercut but comes up short. Rafael Natal shoots in for a takedown and gets it. Casey fights hard and gets back to his feet. Natal shoots again but Casey tosses him and winds up on top. Natal gets to his feet and escapes. The fighters battle in the clinch briefly and then break. Good right hand from Casey. Natal responds with a right hand that sends Casey crashing to the canvas right at the bell.

Round two begins and Natal accidently hits Casey with a groin shot. The fight is stopped to let Casey recover. They restart and Natal lands another big right. He moves in and scores a big takedown on Casey. Natal begins working from the full guard. He passes to half guard and lands some good shots. Casey scrambles and gets to his feet. The fighters battle in the clinch along the fence. Good knee from Natal. Good combo lands for Rafael. Casey presses forward and eats a leg kick. Big right misses by Kevin and Rafael immediately shoots in and lands a takedown. Big hammer fists from Natal to end round two.

Round three begins and Natal lands a good leg kick and then a couple punches. Casey looks tired and has his hands low. Kevin tries a huge uppercut but misses badly. Natal moves in and lands a good shot. Casey again misses with wild shots. Natal shoots in for another takedown and gets it. He moves to half guard. Decent shots from the top by Natal. He moves to full mount and begins hammering down with shots. Natal moves for an arm-triangle attempt but lets it go. Huge shots from Natal and it is all over!

Rafael Natal defeats Kevin Casey via TKO at 3:37 of round three