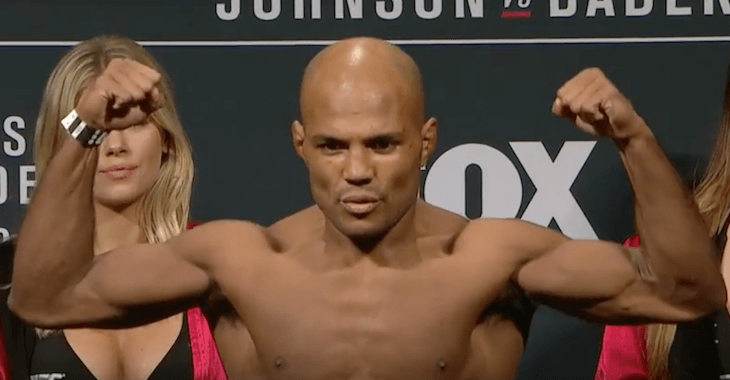 A flyweight bout between Dustin Ortiz (15-5 MMA) and Wilson Reis (20-6 MMA) took place during on the UFC on FOX 18 preliminary card.

Round one begins and both fighters fire off with low kicks. Good right hand from Ortiz. Head kick attempt by Reis misses. Front kick to the body from Ortiz. Inside leg kick from Reis. Ortiz responds with combo. Nice overhand right scores for Dustin. Good shots inside from Reis. The fighters trade low kicks. Good combo from Reis. He presses Ortiz against the fence and gets a takedown. Ortiz is back up but then right back down. Dustin pops up again and lands a good elbow on the break. Good left from Wilson. Kick to the body from Ortiz. Good knee from Ortiz. Reis is looking for the takedown. Ortiz shakes him off and lands a body kick. Dustin shoots in for a takedown but misses. Reis scores a big takedown to end round one.

Wilson Reis lands a good left to begin round two. Dustin responds with a body kick. Ortiz shoots for a takedown but is stuffed by Reis. Good shots from Ortiz. Reis shoots in for a takedown. Ortiz is fighting it off against the cage. Reis gets Ortiz’s back but Dustin shakes him off and they break. Good left from Reis. They trade kicks. Reis earns a takedown but it is short-lived. Ortiz fires off as they break. Dustin shoots in for a takedown but misses. Reis scrambles and takes Ortiz down. Dustin pops back up and they begin to battle in the clinch. Big takedown by Reis. He immediately takes the back of Ortiz and his hooks are in. He’s searching for a rear-naked choke. He lets go and starts landing punches. He transitions to an armbar but can’t get it before the horn. Round two ends.

Round three begins and Ortiz starts off with a head kick that Reis blocks. Good right hand from Dustin. Reis shoots for a takedown and gets it. He moves to Ortiz’s back and land some good shots. Wilson is smothering Ortiz on the ground. He takes his back again but Dustin scrambles and escapes. Nice combo lands for Reis. Good left and a knee from Dustin. Wilson pushes Ortiz against the fence and forces a trip takedown. Ortiz keeps getting to his feet but Reis is relentless and continues to drag him back down. Good scramble by Ortiz and he gets free to his feet. That freedom was short-lived as Reis earns another takedown and moves to full mount. Wilson takes his back and starts softening him up with shots. Ortiz is fighting to get back up and does. Another takedown lands for Reis to close out the fight.