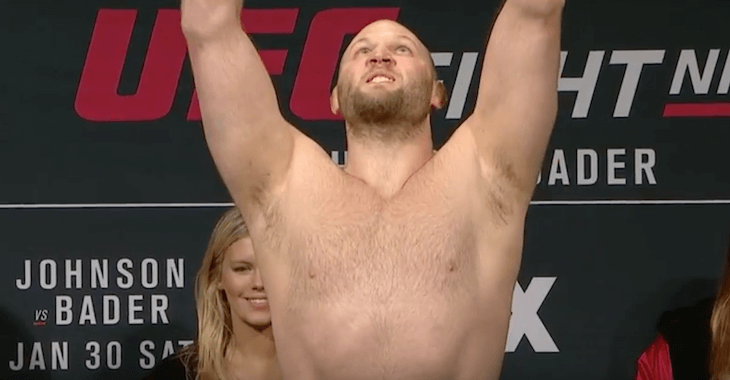 Round one begins and Rothwell opens up with punches. Good body kick lands for “Big Ben”. Big right hand scores for Barnett. Josh is pawing with the jab. He’s finding a home for it. Rothwell responds with a leg kick. Barnett replies with one of his own. Good jab to the body by Josh. Ben answers with a leg kick. Another good jab lands for Barnett. Big shot from Rothwell. Nice jab by Josh. Rothwell is bleeding. More jabs from Barnett. They clinch against the fence and then break. Nice left hand from Barnett. Ben smiles at him. Good combo lands for Ben. Nice elbow inside from Josh followed by a jab. Good straight left from Barnett. He tries a front kick but misses. The horn sounds to end round one.

Round two starts and Ben moves in with punches. Both men are throwing big shots. The fighters clinch and Josh begins to land some knees. They break. Josh misses with a leg, Ben with a right. Good uppercut from Rothwell. Good left hand scores for Josh. Nice right jab by Barnett and Ben replies with one of his own. Another good left jab scores for Barnett. Josh with shots to the body and then he goes upstairs. He follows up with a kick to the body. Both men start throwing. Rothwell lands a crisp jab. Barnett shoots for a takedown. Rothwell grabs his neck. He has it tight. Josh taps it is over! Wow!

Ben Rothwell defeats Josh Barnett via submission (guillotine choke) at 3:48 of round 2