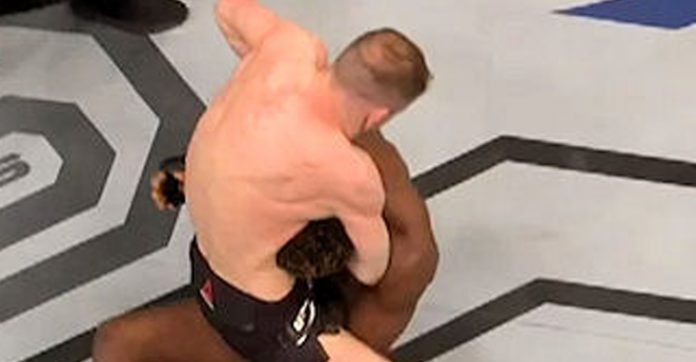 Danny Henry did not come to mess about at UFC London. He must have had some big plans, something on the stove, or he just flat-out wanted to make a statement today. His four-fight win streak just got pushed up to a five-fight win streak in less time than it takes to fully microwave a Pop Tart. As soon as the bell sounded, he blitzed newcomer Hakeen Dawodu and dismantled him lightning fast.

Make that two blue-chip prospects submitted by Scots in a blaze of glory. Danny Henry strangles Hakeem Dawodu for the upset! #UFCLondon pic.twitter.com/bE7JD9tnTo

A wild exchange and a crushing punch left Dawodu’s neck wide open and Henry latched onto it like his life depended on it. He squeezed with the force of the Jaws of Life and Dawodu didn’t even tap, he just passed out. Absolutely incredible. The crowd went wild. Look to see Danny Henry get a quick booking considering he didn’t even break a sweat in this encounter and probably is a shoe-in for a bonus at UFC London today.

This card has started off with some big finishes with only one fight going to the decision so far and a lot of fights still left including the main event between Fabricio Werdum and Alexander Volkov.

Your UFC London results so far:

Danny Henry def Hakeem Dawodu via guillotine choke at 0:39 of Round 1.
Paul Craig def. Magomed Ankalaev via triangle choke at 4:59 of Round 3.
Kajan Johnson def. Stevie Ray via split decision.
Dmitriy Sosnovskiy def. Mark Godbeer via rear-naked choke at 4:29 of Round 2.