This story is an April Fools Joke.

For several months now it seemed as though Bellator had been picking up steam and finally hitting a stride of loyal viewers. A partnership with Spike TV meant ratings were rising, and as a result fighters were being signed. There were even talks that Bellator would eventually surpass its rival promotion, the UFC. However earlier today news broke that Zuffa LLC bought out its former network partner, Spike TV, and suspended Bellator Indefinitely.

In 2005, some years after the Fertitta brothers and Dana White bought the UFC, the idea of The Ultimate Fighter reality show starting growing, however no network wanted to air such a show due to the negativity surrounding the UFC at that time. The Fertitta brothers fronted Spike TV the $10 million to air the show, and thus the UFC Spike TV partnership was born. In early 2011 the UFC began working with Fox, and since then have continued to grow. This move made by the Fertitta brothers and White to purchase their former partners at Spike TV was one made entirely to halt Bellator from progressing.

BJPENN.com reached out to Bellator president Bjorn Rebney for a statement regarding the Spike TV buyout and Bellator’s indefinite suspension, but he declined to comment at the present time.

Bellator is scheduled to host its inaugural PPV event on May 17th, however due to Spike TV’s buyout the PPV has been postponed until further notice, with no date for a rescheduling in the near future. The card was supposed to be headlined by Michael Chandler and champion Eddie Alvarez who have done battle twice before, with each man picking up a victory. The card would have been co-headlined by former UFC fighter Quinton Rampage Jackson, who was scheduled to fight Muhammed King Mo Lawal.

BJPENN.com also reached out to Quinton Rampage Jackson to get his take on the situation. Rampage, who has been very outspoken on his distaste for his former employers said: “F*** the Fertitta’s, and F*** Dana White.”

As news often does, the news of Spike TV’s buyout and Bellator’s suspension broke on Twitter, with Dana White sending out several Tweets about the situation. 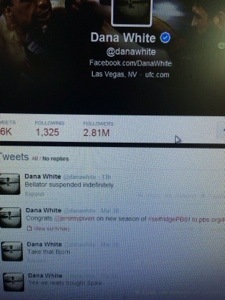 We will continue to update you as this interesting story unfolds.